The U.S. DOT is set to expand its work on attempting to tamp down what’s long been considered a chief criticism of its handling of carriers’ safety metrics in the U.S. DOT’s Compliance, Safety, Accountability program — the lack of accounting for crash responsibility in CSA’s Safety Measurement System scores.

The Federal Motor Carrier Safety Administration announced Wednesday a plan to remove some types of crashes from carriers’ scores when those crashes are deemed nonpreventable for the truck operator or carrier. The agency is slated to publish its plan in the coming days and will seek comment for 60 days.

If the rule is made final, carriers — including owner-operators — will be able to dispute certain types of crashes via the existing DataQs system and potentially have the associated points removed from their Crash Indicator BASIC percentile ranking, the “score” in that category. Though the Crash Indicator BASIC has never been public and is only accessible to law enforcement and carriers within their own dashboards, the BASIC is used to target carriers for compliance reviews or other intervention by FMCSA.

Though the agency has been testing such a crash-fault dispute system since mid-2017, FMCSA plans to expand on the program and make it more permanent. Starting Oct. 1, carriers will be able to dispute 15 types of crashes, rather than the eight types allowed under today’s pilot program. The agency says it will make a determination within 24 months whether to continue accepting reviews for the additional seven types of crashes added to the list.

Once the public comment period on the proposed rule has concluded and the agency publishes a final rule, it can proceed toward removing non-preventable crashes from carriers’ Crash Indicator BASIC percentile rankings. Under the current review system, crashes deemed non-preventable by the carrier remained in the BASIC, but were notated as non-preventable.

The current crash dispute system will remain operational until Sept. 30 for crashes that occur through July 31. Crashes occurring after then will need to be uploaded in the new system starting around Oct. 1.

The addition of crash fault accountability within the CSA program is part of a broader effort by FMCSA to overhaul the CSA program, which was heavily critiqued in its first several years before being yanked from public view by Congress. Congress also required an external review of the system by the National Academies of Science, who two years ago recommended sweeping changes to the program. FMCSA is still in the process of figuring out how to implement those reforms.

Types of crashes and the crash review process
Since August 2017, FMCSA has fielded review requests for eight different types of crashes (listed below). Of the 12,249 review requests received between Aug. 1, 2017, and May 31, 2019, just more than half — 5,619 — were eligible for review, FMCSA says, meaning they were one of the crash types listed by FMCSA. Of those 5,619, 93 percent were deemed non-preventable, and therefore would be removed from CSA scores under the system proposed by FMCSA.

Here are the types of crashes reviewed by FMCSA in the first 18 months of the program:

In addition to those crashes, FMCSA will in October begin accepting review requests on the crashes listed below: 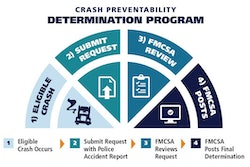 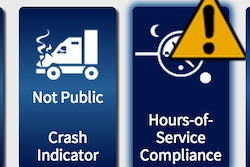