Many owner-operators, though technically not required to do anything before the looming Jan. 6 deadline, are in some ways unaware of, and unprepared for, the new CDL Drug & Alcohol Clearinghouse rule that takes effect in less than a month.

“For owner-operators and smaller fleets, I’m going to assume most of them haven’t registered yet or even know that they need to register,” says Luke Kibby of drug testing consortium CleanFleet. His company works with thousands of owner-operators, and they’ve been aggressive in emailing and calling clients to alert them about what they need to do and helping them get set up.

“We’re a month away” from the deadline, he said, “and we’re maybe a third of the way there in getting [our owner-operators] registered.”

Many consortiums and third-party administrators aren’t diligent in calling and registering their owner-operators, Kibby says, relying on their customers to take the initiative. “I can’t even imagine” what their registration numbers look like, he says. 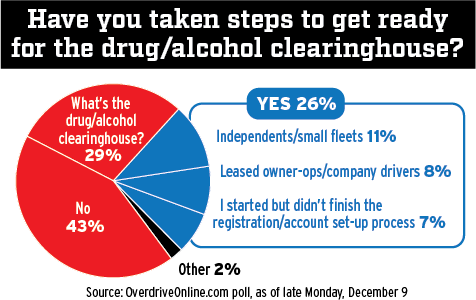 Only 1 in four respondents to this OverdriveOnline.com poll reported having conducted due diligence around clearinghouse registration. For independents and small fleets, creating a clearinghouse account and delineating for the agency the testing provider or consortium you work with is a necessary step. For drivers and leased owner-ops, registering is entirely optional unless changing jobs, but could be appropriate for verifying your information in the system is accurate. In the case of a job change, new prospective employers will need to run a pre-employment query on your profile in the database to screen for adverse testing results.

The Clearinghouse rule overhauls how fleets report and verify drivers’ drug testing history, adding a new layer into the hiring process and new administrative work for fleets of all sizes, including even two-truck carriers. It also adds new annual requirements for independent owner-operators. (To read what’s required of owner-operators, read Overdrive‘s report from November.)

Overdrive polling over the past week backs up the assertion that Clearinghouse registration is lagging and, thus, could create a headache for fleets and drivers early next year. Of 450-plus respondents, nearly half (43%) answered “No” when asked if they had taken steps to prepare for the rule going live Jan. 6, as shown in results above.

Another 29% asked, “What’s the drug/alcohol clearinghouse?” Combined, the two answers account for more than 70 percent of poll respondents. Just 19% of respondents said they’d taken the steps necessary to register. The remainder said they have started the process but haven’t finished.

“Very flustered,” said one independent owner-operator in an email to his drug testing consortium, forwarded to Overdrive. “I tried to get all the information after we talked, [but] I am locked out and can’t get back on the site.” The trucker said he’d call to get another explanation or he’d quit trying to sign up. “It’s very frustrating … and anyway I’m flustered,” the driver repeated.

“I spent a few hours today trying to get registered. This isn’t as simple as it sounds,” said commenter “RC” on Overdrive‘s website last week.

These frustrations aren’t lost on Kibby. He’s seen reactions from hundreds of owner-operators venting about the system. Admittedly, he says, the process isn’t difficult, especially for those like him who’ve seen it done hundreds of times. “But there’s still a huge learning curve right now,” he says.

A spokesperson for the U.S. DOT’s Federal Motor Carrier Safety Administration told Overdrive last week that the agency “has been working to implement the Congressionally mandated Drug & Alcohol Clearinghouse as efficiently and effectively as possible,” and that it has “been encouraged … by the feedback it has received so far.”

The spokesperson also noted that registering in the Clearinghouse technically isn’t a requirement for all drivers — only those that wish to apply for a job at a different fleet. Same for leased owner-operators when switching fleets. The annual query required by fleets only needs a written consent form and, for now, no account in the Clearinghouse.

However, that’s not the case for independent owner-operators and small fleet operators. In the case of independents, they must register as both an employer and a driver, which has been another point of frustration for such truckers, said Kibby, and a common issue. Small fleets need an employer account and will need to query for all new driver hires and once a year for all other drivers.

FMCSA’s point is clear though: No immediate action is technically required, thus truckers have time to work out the kinks in registering for the Clearinghouse portal.

Independent owner-operators won’t need to register until they perform their own required annual query, in which they must check the database for their own CDL number. That check-up must be performed within a year by a drug consortium or third-party administrator designated by each owner-operator.

Independents must also purchase queries from the Clearinghouse to run their annual check. Queries can be purchased at this link.

Jeremy Reymer, CEO of DriverReach, says he foresees the new administrative tasks as the rule’s largest hurdle. “The real impact initially will be the administrative burden it puts on all parties. It’s a necessary burden,” he says, noting the need for greater insight into a driver’s drug test history. “This is long overdue. But it’s still a burden.”

From his perspective, FMCSA’s Clearinghouse site is clear, has lots of resources available to stakeholders like fleets and drivers and has features like notifications and sample language to amend drivers’ employment contracts to reflect the need for the annual Clearinghouse query process.

But he foresees an early, significant logjam looming for the driver hiring process (including contracting processes for leased owner-operators) when the Clearinghouse goes live next month. “The challenge is going to be — not enough drivers are registered,” he says. “Every time a driver applies for a job, they’re going to be stuck,” he says.  That will eventually play out, he says. But initially, “this whole process is going to be new to everyone.” 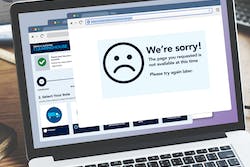 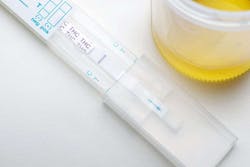 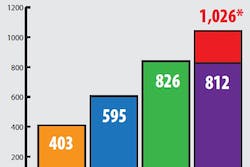