With a third pharmaceutical supplier announcing this week successful trial results of a COVID-19 vaccine, it appears a wide range of fleets, not limited to mega-carriers and possibly including non-refrigerated trailers, will play a role in nationwide distribution starting next month and lasting well into 2021.

That supplier, Astrazeneca, came under fire Wednesday after acknowledging an error in its study and other irregularities and omissions, it was widely reported.

Vaccines in the works by Astrazeneca and Moderna have much more lenient tolerances for temperature and time requirements than the first one announced, made by Pfizer. It requires distribution at -94 degrees Fahrenheit, which poses logistic concerns, though Pfizer says it has distribution plans in place.

Using separate mobile freezer units, Pfizer’s vaccine may able to be moved in trailers cooled to around -30 degrees Celsius (-22 Fahrenheit), which is not uncommon for refrigerated hauls.

“I think the big 3PLs, UPS and FedEx are already in contracts to haul for Pfizer and Moderna,” said Dwayne Cowan, a sales vice president with Thermo King, a major producer of mobile and fixed refrigeration equipment. DHL is also on that list, according to a published report.

However, with a target of reaching the entire population, “There may be opportunities for smaller fleets to support different parts of the supply chain,” Cowan said. The large carriers and 3PLs are no doubt “already working with multiple carriers to get their products to different locations.”

That’s especially true when it comes to the final-mile challenges of moving vaccines from larger cities to small towns and rural areas. In the case of Pfizer’s vaccine, that could prove quite difficult as points of storage and dosing lack the equipment or trained personnel to maintain the proper temperature over certain times.

Officials with Operation Warp Speed, a public-private partnership for development and distribution of COVID-19 vaccines, said that agreements have been reached to allow administration of the vaccine by independent and chain pharmacies covering more than 60% of the nation’s pharmacies.

Even with all the concern over Pfizer’s temperature requirements, the company’s ready to roll with special packaging and “a flexible, just-in-time system, which will ship the frozen vials to the point of vaccination,” Pfizer says its online fact sheet. “We have developed detailed logistical plans and tools to support effective vaccine transport, storage and continuous temperature monitoring.”

The U.S. distribution plan “will be to largely ship from our Kalamazoo, Michigan, site direct to the point of use.” Other shipments will come out of its distribution centers in Pleasant Prairie, Wisconsin.

Pfizer says its plan is to use its “strategic transportation partners to ship by air to major hubs within a country/region and by ground transport to dosing locations.” The company has “specially designed, temperature-controlled thermal shippers utilizing dry ice” to maintain the -70 degree Celsius (-94 F) condition for up to 10 days. Even after opening, the box can be used as a freezer if it’s quickly reclosed and replenished with dry ice.

Cowan said Thermo King has equipment that can handle the -94 temps, which could be used for storage at the point of use since Pfizer appears to have its shipping arranged.

Health and Human Services Secretary Alex M. Azar II, speaking prior to Astrazeneca’s announcement, said by the end of December, about 40-million doses of the Pfizer and Moderna vaccines are expected to be available for distribution, pending FDA authorization. And that’s enough to vaccinate about 20 million of the most vulnerable Americans, he added. The vaccines require two doses per person.

Thermo King also offers air cargo containers, which it developed in 2005 with  Envirotainer, becoming a leader in transporting pharmaceutical and other temperature-sensitive products by air. While the equipment doesn’t reach -94 F required for Pfizer’s vaccine, it might prove useful in transporting other vaccines, Cowan said.

Moderna’s vaccine needs to be kept at -20 Celsius, or -4 degrees Fahrenheit. Astrazeneca’s vaccine can be stored in a refrigerator. The mid-week news about its problems raises questions about how soon it could get approved. Experts said those disclosures “have eroded their confidence in the reliability of the results,” reported The New York Times.

Another major maker of trailer reefer units, Carrier Transicold, announced in October it had developed so-called Carrier Pods with monitoring firm Sensitech. The units are intended as an all-in-one option for carriers hauling COVID-19 vaccines.

Such specialized refrigeration systems have been developed as independent modules, not reefer units attached to the outside of a trailer. So it’s possible some vaccine transport could be handled by placing such freezers inside a dry van or straight truck lacking a typical trailer reefer, Cowan said.

A key point in COVID vaccine distribution will be real-time monitoring of temperature control and location, said Chris MacDonald, a senior vice president at asset tracking provider Orbcomm, which has been working with carriers established in pharmaceutical freight. “They’ll have 100% visibility from the time it’s loaded to the time it’s delivered,” MacDonald said. “They’ll be able to monitor temperature and react to any alarms if it falls outside the temperature range.”

If there’s a critical volume of vaccine-related freight — including goods like gloves, swabs, syringes and other necessary items to administer doses, in addition to the actual vaccine itself — vaccine hauls could draw capacity away from other time-sensitive and refrigerated freight.

“I can easily see a regulation happening that says the vaccine must get moved, and contracts and service commitments for other commodities can be put to the side,” said Ben Wiesen, CEO of transportation management software provider Carrier Logistics. That might cause temporary shortages of some goods in some areas, “but it’s the morally right thing to do, to get the vaccine where it needs to be,” he said.

Ken Adamo, chief of analytics for DAT Solutions, said he’s closely watching how vaccine distribution might affect truck capacity. “There’s no historical precedent for the vaccine response to a 100-year pandemic,” he said. He thinks most of the rush of vaccine freight will be handled by major name-brand carriers. Should some of their capacity be diverted to vaccine freight, that could leave non-vaccine loads available to owner-operators and small carriers that otherwise wouldn’t be. 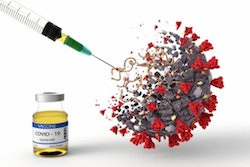