The momentum that buoyed spot market rates since June appears to have stalled in the first month of 2021, with the economic recovery slowing and seasonal trends re-emerging in the freight market in what's a typically slower month most other years. All three major truckload sectors -- flatbed, dry van and refrigerated -- in January posted month-to-month declines, according to monthly rates averages provided by Truckstop.com.

Those were the first monthly dips for flatbed and dry van, which both posted seven consecutive months of growth, from June to December. Refrigerated spot rates in January dipped for the second straight month, following seven months of upward momentum from May to November. Despite January's dips, monthly rates averages are still historically high. 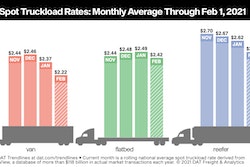