A scale can be the bane of a truck driver’s existence, turning a long-held friendly rural-shipper relationship sour when an inaccurate estimation of cargo weight is found faulty 50 miles down the road at the nearest weigh point. That 50-mile return trip gives a driver a lot of time to think about just who is at fault.

Though I imagine some may have thought it impossible, when you hear what Kenyan haulers are going through in their country you may send up big praise for the relative profusion of accurate, accessible scales here in the United States.

Drivers in Kenya have lately experienced no small amount of uncertainty as to accuracy, according to this story in the African Business Daily. The country recently stiffened axle and weight regulations, and many scales in the country, as drivers have been finding out in droves, are old and unstable (see the picture by Anthony Kamau of the Business Daily; click on it for their full story), resulting in cargo shifting and inaccurate axle and gross weight readings and large, unsubstantiated fines, said Kenya Transport Association CEO Eunice Mwanyalo. Some drivers, the Daily reports, have gone so far as to resort to bribes of scale operators less costly than the fines at some notorious bridge crossings.

UPDATE:
In case you missed the news, the Women in Trucking organization’s attempt to break the Guinness World Record for the largest gathering of female truck drivers in one place at the Mid-America Trucking Show more than a week ago was unsuccessful (I blogged about the attempt here). They needed close to 500 drivers there to beat out the current Dutch-held record. Their official tally came in just under 300. That didn’t cheapen the attempt, though. And as FMCSA administrator Anne Ferro opened her remarks to the group, “First, I’m pleased that we broke the North American record of women truck drivers gathering at the same time, and I am absolutely confident we’ll get the world record next year!”… 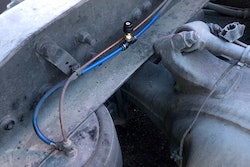