Third time’s the charm? Feds say no to tolling I-80 in Penn.

A development that could mark the end of a long saga (you could make a case that it goes back to the 1980s — heck, even that it begins prior to the establishment of the Interstate Highway System itself) happened yesterday with the third federal rejection of an application by the state of Pennsylvania for authority to toll Interstate 80 within its borders.

I first wrote about the controversy over the state’s attempt to generate more revenue by tolling I-80 with the story accompanying Overdrive‘s Highway Report Card survey, in which Pennsylvania has long scored high for “Worst Roads,” in 2008. Then, as now, detractors of tolling I-80 noted that the state’s application, under a SAFETEA-LU pilot project for tolling interstates, didn’t fit the guidelines, as monies to be generated from tolling were in a somewhat roundabout way, via state “Act 44” legislation already in place (and which relied on toll monies from I-80 in its funding projection), dedicated to funding transportation projects outside the I-80 corridor.

After the application was rejected twice, and state officials each time adjusted their plans, opponents, from local interests to the Owner-Operator Independent Drivers Associations and other trucking groups, kept up their vocal opposition.

“As we have been saying for more than two years,” OOIDA Director of Legislative Affairs Mike Joyce noted yesterday, “the Pennsylvania legislation known as Act 44 was flawed from the beginning, forcing PennDOT and the Turnpike to apply not just once, not just twice, but three times. Hopefully, they recognize they’ve struck out and should take a seat on the bench.”

But not so fast, according to the Governor Rendell, quoted in the online magazine TollRoadsNews.com here, the state will continue to investigate public-private partnerships on road tolling. And, Rendell told TollRoadsNews editors, “I have  a prediction for you. When there is a reathorization they [the Feds] will lift the ban on tolling [interstates]. There is no appetite for raising the gasoline tax.” 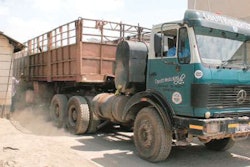