The Cumberland River in and around Nashville, Tenn., Thursday, May 6, finally dropped below flood stage, and for many affected in the area, the cleanup process, if not already well underway, began in earnest. At the now-dry site of the inundated TravelCenters of America location downtown (the clean-up there, said sources at the site yesterday, could take up to six weeks), West Nashville Towing was in the process of removing flooded rigs, for those carriers and/or owner-operators who hadn’t made their own arrangements.

One driver, said Tracey Thompson, a guard with International Corporate Security on the scene yesterday when I visited, tried to drive his own truck out. “He used about six gallons of diesel just trying to get it started,” Thompson said, only to break down about 20 miles down the road.

Legit Transit-leased owner-operator Malik Yafai’s 2005 Kenworth T600 was among the trucks caught in the flood Sunday there. Yafai (pictured), who lives on Brick Church Pike in North Nashville and typically parks at the Pilot Travel Center on Trinity Lane at I-65 when home, arrived in town Saturday, May 1, from a load running from Miami to Cincinnati, and he found the Pilot lot full to the gills.

So, he told me yesterday, “I decide to bring it over [to the TA], I find parking and I go home. I come back the next day and the water is up over the tires, so I was like, should I take it or leave it?” He suspected, as did many others, no doubt, that the water levels would go down. Little did he know the worst was yet to come.

When Yafai returned to the site Monday he found water “almost to the top of the truck. So now I don’t know what I’m going to do. It’s a big loss.”

He’s talked with his insurance company and some mechanics, who gave him a little hope that the vehicle would be recoverable. All the same, he’s aware of the problems flooded vehicles can bring along with them, and for more on that, I’ve included here below the video a brief rundown from an owner-operator maintenance consultant with ATBS, Bill McClusky, of what it takes to get a flooded rig back into service. In short, as the operator mentioned at the top of this story found out, it’s a bad idea to just get in and try to drive it away.

Though Overdrive‘s own equipment editor John Baxter ended his description of making sure all wiring is dry and a myriad other measures one must take to guard against problems in the engine and related system with the contention that it “makes one almost want to total the truck and be able to buy new. . .”, it is possible to get such a truck back up and running, McClusky says. If your rig was caught in the water in Tennessee, you might quiz your mechanic on these procedures below.

Once the vehicle is removed from the water, or the water recedes, it is imperative that the repairs happen quickly. When air gets to the wet iron, rust and corrosion happen very fast. Do not try to start the engine. If the water level was high enough to fill the engine cylinders, trying to start the engine will result in a hydro lock and could bend a connecting rod or break a crankshaft. Do not turn the ignition key on. Disconnect the batteries. You want to avoid supplying electrical power to the wet electrical components. Immediately drain the oil from the engine, change oil filters and then hook up an external pressurized oil priming system to an oil galley port in the engine block. While leaving the oil pan drain plug out, flush the engine oil system with 10 gallons of clean engine oil. If the water level was higher than 6 inches above the line where the oil pan attaches to the engine block then there is a possibility that water may have entered the engine cylinders. If the water level was higher than this or you are not sure, perform the following procedure:

1. Remove the valve cover and injectors.
2. Rotate the crankshaft by hand (do not use the starter) and watch for water coming out of the injector bores in the cylinder head.
3. Remove as much water as possible using a vacuum pump. A turkey baster works well also. Once water has been removed, pour a small amount of oil into each cylinder. About 2 ounces per cylinder is plenty. Then rotate the crankshaft by hand to allow the piston rings to coat the cylinder liners with oil. This will inhibit corrosion.

Refill all components with clean mineral oil of the appropriate type. It is not necessary to use synthetic oil, as this fill is only temporary to flush the component. If you have other fluid lubricated systems mounted on the truck, drain and refill them as well with the appropriate fluid.

Remove the drain plugs from the bottom of the fuel tanks and allow the water to drain. Allow the tanks to drain until a clear stream of fuel comes out, then put the plugs back in. Reinstall the injectors. Remove the return lines to the fuel tanks and place in buckets. Attach a fuel priming system to the inlet port of the primary fuel filter and pressure flush the fuel system. Watch for water in the fuel coming out of the return lines. When fluid is all fuel, stop and disconnect the priming system.

Now on to the electrical system. Using electrical contact cleaner and dielectric grease, disconnect, clean and lightly grease all of the electrical connections in the engine compartment. Remove the harness connection to the ECM and clean and lightly grease the connector, then reconnect. Check for water in light fixtures, drain water and clean with electrical contact cleaner, lightly grease connections with dielectric grease. Check fuse panels for moisture. If wet, clean with electrical contact cleaner and allow to dry completely. Grease the chassis of the truck. Load-test the batteries and replace if bad. Reconnect battery cables and watch for any possible shorts in electrical system. Check all fuses. Start and run engine to operating temperature. You may have some blue smoke due to the oil poured on top of cylinders. This should clear up fairly quick. Run engine at idle speed until it reaches operating temperature. Continue running for approximately 15 minutes. Shut down engine, change oil, oil filters, and fuel filters. Run the truck for about 50 to 75 miles to circulate the oils in the transmission and axles. Drain and refill the transmission, drive axles, steer axle hubs, and power steering with appropriate lubricants. Check to be sure breathers on transmission and axles are clear.

This addresses the major issues with the truck’s drive train.

——————–
UPDATE: Just picked up a copy of the new weekly Nashville Scene newspaper. Quite an amazing photo on the cover, on I-24 eastbound, Saturday evening, among the first major sites of the flooding we’ve been dealing with here since. Click the cover image for their impressionistic story, made up primarily of first-person accounts from residents and others all over the city. 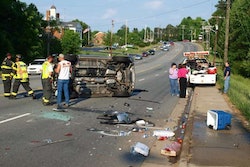 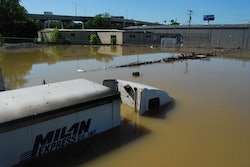 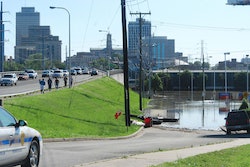