Writer Mary Richardson, whom Atlanta-based Creative Loafing describes as a former editor with the Truckers Connection publication, had what she describes as “nightmares” during relatively modest spikes in fuel prices during the year 2006, shortly after she started working there. She “was having these apocalyptic nightmares about fuel prices getting so high that trucks would stop,” she told Creative Loafing‘s Wyatt Williams, “causing grocery store shelves to fall empty, with people running around and buying up everything, having food wars.”

While I wouldn’t call my own imaginings of similar things during the much bigger run-up in diesel prices in 2007-2008 nightmares, they did well inspire to one degree or another the piece of fiction I wrote for Truckers News’ June 2008 issue, about a fictional shutdown proceeding from a disaster scenario.

The intent, beyond being an interesting experiential read, was to highlight the integral nature of the industry to the very basic essentials of American life. Richardson has not totally dissimilar, if more broadly cast, intentions with her 2009 book, Truckers, a photographic/narrative look into the driving public, which attempts to deliver a sort of inconvenient truth (for haulers and the greater populace alike) about the excessive nature of the American consumer, as she tells it in the Creative Loafing interview mentioned above.

While she admits to attempting to “leave these kind of direct statements out of” the book, she told the paper’s interviewer this:

People rarely think about how their consumption of products and food, which are shipped across the country on a truck, affect their environment, cost of living, and quality of life because of all the huge roads that are built to acomodate these vehicles, the noise they make, the fuel they burn (12% of all fuel purchased in US). I thought if people had more of a complex awareness of this system, maybe it could change, and maybe we wouldn’t feed the system by buying so much and so irresponsibly.

I imagine, though, that some of you might well object to Richardson’s characterization, in the interview, of truck drivers as people who are “victimized and have to play out these roles in the hands of the consumers who create the demand and the government and private networks that direct its operation.”

Inconvenient truth? Simplistic, overbroad pigeonholing? The book, somewhere between a coffeetable book and literary narrative, is more artfully presented than this statement, in any case. You can check it out here or on Amazon, and a couple page views follow. 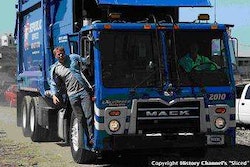 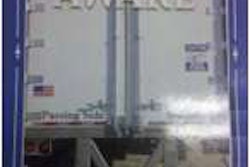 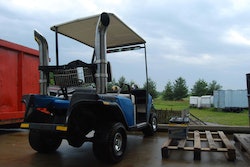 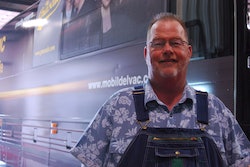