The current “IRT: Deadliest Roads” season of the “Ice Road Truckers” reality-TV series franchise on the History Channel aired its second episode last night, after a launch the previous Sunday that garnered 3.4 million viewers. It pits North American drivers from past seasons, as well as a new face, against the incomparably rugged terrain and chaotic cities of the Himalayas.(Read a summary of IRT’s second episode here.) If you saw it, you came into contact with the hauler who today might be the leading figure in the public imagination when it comes to U.S. trucking. Before that episode aired, I spoke with Lisa Kelly (pictured, History Channel photo) about her growing notoriety, enabled by a supportive carrier back home and what might well be best described as the hardworking, driven, no-nonsense aspect of a woman Esquire magazine, as you may remember, dubbed the “Sexiest Trucker Alive.”

Kelly, 29, is still employed by Carlile Transportation, truckers of the Dalton Highway (the “Haul Road”) in Alaska and her only trucking employer in her seven-year driving career. “They trained me,” she says. These days, she’s been traveling more and more in the air, flitting here and there doing promotions for the new series, but says the 2004 Kenworth W9 she more typically rolls in is waiting for her in Alaska. “I’m in love with it,” she says.

Getting back to her regular runs may take time, she adds, but that’s OK in the end.

Is she enjoying all the hubbub? “I am having fun,” she says, indeed.

Check out the first IRT episode of this season online, which aired on the History Channel more than a week ago now. And see below for selected bits from my interview with Kelly.

Do you think about your situation in terms of being an ambassador for U.S. truck drivers to the general public?
Whether I choose to or not, that’s the place I’ve been put…. I’m doing the best that I can to represent who truckers are and put my personality into it.

Is your day-to-day life relatively similar to what it was before IRT?
I would say it’s the same with a twist. [IRT has at this point] just taken over, the last three months or so. It’s completely changed from me being me to me being that person on TV. But I still feel like I’m me.

Are you back at work with Carlile at this point?
I’ve had the same truck for two years. It’s a 2004 Kenworth W900L. I have a push bumper on it now. I haven’t gotten to do a whole lot lately. I’ve been running around and doing a lot of commercial stuff and stuff related to the show. Carlile’s been awesome about this whole thing — they knew what they were getting into. They were very encouraging for me, realizing it’s a once-in-a-lifetime opportunity. “We’ll save your truck,” they said. They’ve let me go all the way around the world — it’s amazing and awesome and they’re a wonderful company to work for.

When you compare the Haul Road with the roads you saw in Southeast Asia, what’s similar? What’s different?
Different? Everything. And similar: pretty much nothing. They both have roads, and that’s about it. One’s got avalanches, the other landslides. Nobody drives the same — we drive on the opposite sides of the road [and opposite sides of the cab].

What was the biggest driving challenge you saw in Asia?
We had new challenges every place we went – the crazy driving and the high crash risk. I never completely got used to it – by the end, though, it was a little like, “this is how people drive here”… The heights made me freeze up in the beginning, and at the end, I didn’t — by the end I could just look over the edge of the cliff like it was nothing. I really learned what a human being can get used to.

In the current season’s first episode, the dynamic of being a woman in something of a man’s world — even more so than trucking might be in the U.S. — was on display almost from the get-go. How did you deal with that dynamic, other than to turn your own camera on the gawkers [which Kelly was seen doing to a crowd of men who formed by and on the road in front of her in the first episode]?
As far as I understood, there had been no women truck drivers there — everybody we ran into said they’d never seen that before. It was a challenge mainly because of my annoyance at the stares that I would get… And though I don’t want to give too much away, I got stopped by the police because they didn’t think I was supposed to be driving — I just showed them my license. 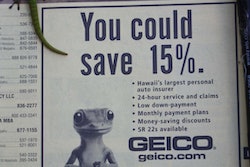 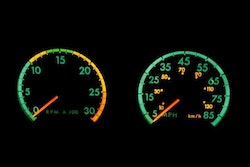 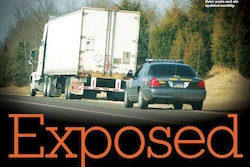 Pre-employment screening in the CSA 2010 era