Charlie Daniels has been at making music for a half-century and then some, and he’s still going strong. He turns 75 next month, and earlier this year he released a new track in “Let ‘Em Win or Bring ‘Em Home,” a meditation on American service members and their families giving all for love of country. With, of course, an explicit message for our elected leaders about a proper course.

As part of his hard-running touring around the country this year, he’ll perform at the Charlotte Diesel Super Show on October 7, and I caught up with him today for an interview about the new track and what his trucking audience has meant to him over the years. Turns out, he’s got more than just gratitude for the American trucker among his fan base. Check out the Q&A that follows for more.

You can download the new song via iTunes and other online retailers. Here’s a link to its page on Amazon.

What did you ultimate hope for in terms of results from the new single?
A couple years ago we started doing the Operation Yellow Ribbon event [with Lipscomb University] in Nashville, a benefit to ensure a scholarship for those former military in special circumstances. The night of that show, we had many military people – from active to off-duty and retired former military – a very pro-military group. I wanted to share my heart with those people, give them something that they would understand. I did this song for them.

Tell me a little more about the inspiration/motivation for writing it.
Why should we lose 31 kids in a helicopter [and many more] … in a war we had no intention of winning? What does winning even mean? If we’re going to get into a war, we need to declare what victory is. If we’re not going to do that, then we ought not to go. We ought to get it done, do whatever we need to get it done. I personally think that our military could win if they were just left alone, but the politicians refuse to keep their hands off of it. They use the military like a political football. Either let them win or bring them home. It’s simple. Don’t leave them over there to be shot at while we play politics.

How has response to the song been on tour this year?
You know something, I’ve never had a song that was quite as thought-provoking as this one is. When I finish playing the song, the applause starts kinds of slow and continues to build and people start standing up around the crowd. Many nights, the whole crowd will stand.

It takes a few minutes to sink in. The validity of how it applies touches a lot of people. At least that’s my feeling.

I don’t imagine the Charlotte show is the first time you’ve ever played for a trucking show audience.
Oh no. We’re kind of a natural at a trucking show. It’s been several years, but I think the last one was in Louisville.

How has trucking figured in your career over the years?
Well, I am a truck owner — we’ve been running trucks for years. We ran three when we carried around all our lights and sound equipment [ today the job’s contracted out to a separate trucking outfit]. I’m out there on the road today, though — 109,000 miles a year. Sometimes it makes sense to fly, but hey, I know all about the road. If anyone has any problems with coming up with shovel-ready projects, I can find them a whole bunch. Well, they might be bulldozer-ready projects.

What have truckers meant to you over the years otherwise, in terms of your audience, perhaps family/personal connections?
I think truckers are some of the most put-upon people in America. Just look at the price of diesel — when it costs less to refine a gallon of diesel than gasoline, where do they come off charging more for it? I can’t understand it…. These guys have to operate on such a thin margin I don’t know how they’re on the road sometimes. Diesel got up to $5 a gallon here not long ago, especially up in the northern states. Somebody builds a toll road claiming they need the tolls to pay for the road, then they never take the toll booths away. They want to cut the time they can run, they cut the margin of profit they can make.

If you looked at each individual 18-wheeler and the taxes that the trucker pays — fuel, tolls, this and that, permits and all the crap they have to put up with — we ought to be able to pave every inch of the U.S. with the money we get from truckers. But that’s not what happens. Only 20-30 cents of each dollar goes toward something truckers need. It’s just ridiculous, it’s crazy.

If all the truckers got together — and I saw this happen in the 1970s — if they decided they weren’t going to run, this country would shut down in 7-8 days. I know most truckers just won’t do that, because they’re proud Americans. But all the same more people need to realize the importance, in all aspects, of what is hauled in those trucks, and concessions to truckers should be made.

What trucks do you run in your touring operation now?
Just a box truck now, driven by Jimmy Potts and his son Chris. They’ve been with us a pretty good little while, several years. Now, with this bunch that could mean up to 41 years.

What can drivers attending the Charlotte show expect?
We’re going to entertain them. That’s what we do. We will see that that they have a good time. I owe them that. That’s exactly what we’re going to do. We’re coming to rock ’em.

Any new material?
We’ll have some you haven’t heard before, yes. Tell all the drivers to come have a good time with us. 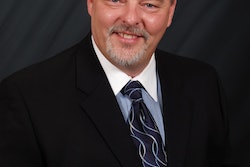 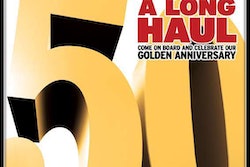 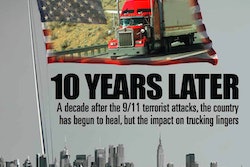