Monthly, we report on the trucking-jobs numbers from the Bureau of Labor Statistics. The reports are routine but interesting in their month-to-month variance, given that they can tend to show trends in conditions improvement — or, of course, the reverse — in the company-trucking market, generally an indicator that tracks with the wider economy. More jobs in trucking, better economic conditions on the way.

But checking out the report that was issued a week ago today, I was reminded of this story by Steve Clemons, which I came across on The Atlantic’s business site a few weeks back. The “Deception in Counting the Unemployed” story told the tale of Leo Hindery, a “former CEO of cable firm TCI, then AT&T Broadband, Global Crossing, and the Yankee Entertainment Sports Network,” Clemons writes, who objects to the way the BLS tracks the unemployment rate. Some radio reports tend today to point out the unknown number of people who have “stopped looking for work” not being reflected in the rate, for instance — that’s Hindery’s efforts to get reporters, pundits and policy idea folks to “abandon discussion of ‘official unemployment’ rates to ‘real unemployment’ figures.”

Hindery routinely releases his own rebuttal to the official numbers when they come out, and at the end of Clemons’ piece in the Atlantic, the writer invited interested parties to get in touch with him on Twitter (@SCClemons) or via email (sclemons @ theatlantic.com) if they wanted to receive Hindery’s monthly “real unemployment report.” I did, and I got July’s, which you can find via Clemons’ Washington Note blog here.

Upshot: If you consider those working part-time out of necessity (they can’t find full-time work) and those “marginally attached” (those who have given up searching for work), the unemployment rate didn’t decline in July to the 7.4 percent officially noted, but rather Hindery’s Real Unemployment Rate fell to 14 percent from 14.3 percent in June. (In June Hindery’s number rose while the official number was steady.)

While freight in some quarters has been looking up, as I reported on in this story today, I don’t know about you, but Hindery’s sounds like a more realistic rate, given all that I’ve seen around me the last few years. What do you think? 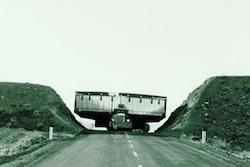