The problem of the disparity between household-goods miles from two cities, the system which still determines many drivers’ paid miles and customers’ rates, and the actual miles driven is one I’ve written about before on Channel 19. In this post, you may remember, detailing a conference call with Anne Ferro hosted by the Trucking Solutions Group a little more than a year ago, owner-operator Jeff Clark asked whether a payment system such as HHG miles that pays the “driver for fewer miles than they did the run on … should be illegal.”

Clark revisited the subject himself in a blog post live today on the Team Run Smart website. The post, under the headline “HHG: The Columbus Problem,” shows one particularly egregious example, in the HHG calculation for Columbus, Ohio, to Green Bay, Wis. Clark writes:

I try to avoid going to Columbus, Ohio, from Green Bay, Wis. Other owner-operators and company drivers turn down loads to Columbus. Last week I had a load to Springfield, Ohio. The backhaul was from Columbus to De Pere, Wis.  De Pere abuts Green Bay’s south side. The load paid 503 miles as per HHG miles. While at the shipper I punched the consignees address into my TND/GPS. It read the distance as 584 miles. Now, do you understand the Columbus problem?

That disparity would mean 81 miles run would go unpaid, line-haul miles revenue (calculated at an average pay-package number of $1 a mile for many leased owner-operators) of $81 dollars foregone — with fuel surcharges on top of that, figure in another two-thirds of that figure or more.

Clark, looking for a different route than what was suggested by his GPS to take some miles off of the trip found one through Ft. Wayne, Ind., that got him down to 533 miles. Taking the I-294 route around Chicago in an attempt to get to Wisconsin before he ran out of hours then added almost 20 miles to that. Regardless, as Clark notes, he’ll be paid on that 503 HHG figure.

You can read his full accounting of the haul here.

While some carriers contend that the differences between HHG and actual miles tend to even out over the course of many loads, with some HHG numbers coming in higher than actual miles run, Clark ends his piece with the best argument out there against HHG miles — that technology has made the entire system obsolete. “I have a 5-inch device that gives me accurate distance from address to address,” he writes, referring to the GPS. “It costs about $300. Technology has made HHG obsolete. It is time to make HHG go away…. I hope market forces make HHG go away. If not, we should start demanding it from FMCSA and Congress.”

Leased owner-operators and company drivers, if you’re paid by the mile, what miles system does the carrier use?

More on the HHG miles issue:
Should HHG miles-based pay be illegal?
In a tizzy over short miles pay
Let’s be practical

Keeping fit on the road
Karen Moore, whom regular readers may remember from this coverage of length-of-haul trends from earlier in the year (Karen runs team flatbed with her husband, Tom, in an independent operation based in Southern California), posted this picture of herself getting a workout next to the couple’s 1999 International with a kettlebell.

For those unfamiliar with the device, as you can see, a kettlebell is a quite small weight, more or less, easily carried along in-cab.

I found the video (below) showing various ways to work out with a kettlebell for those who’ve never done it — consider these 17 kettlebell workouts to add a little weight-resisted aerobics to those pushups and situps. 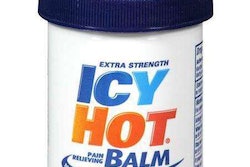 I’ll have the Tabata with a side of ouch 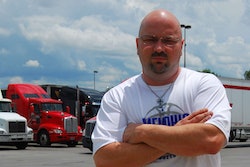