A new rocking trucking song, available via video below, by recently former Australian driver Caede Ridgway came about as a result of Ridgeway’s time behind the wheel, he says. The 29-year-old today lives “in a town called Port Macquarie in the state of New South Wales on the East Coast of Australia.”

Ridgway worked as a car mechanic for a time for going out to get Australia’s equivalent to the CDL “a few years back,” he says. “The first truck that I learned to drive in was a 1978 Volvo N10 with a 13-speed RoadRanger gearbox. I quickly learned how much old trucks with excessive steering play like to wander from left to right on the road, even when driving under 50 mph, or as we say in Australia, 80 kmph.”

He drove a Freightliner FL112 “tipper truck” hauling “wet concrete back and forth from a batch plant to a road paver to make a new section of local highway called the Oxley Highway,” he says.

He writes songs and makes vids to share them in his spare time. Enjoy:

Cargo theft near-bust in ATL
Frequent commenter Gordon Alkire, an owner-operator out of Riley, Kan., wrote in with a tip following last week’s cargo-theft reporting and prevention items (on a related note, I unearthed this linked 2010 feature by Max Kvidera on protecting yourself from thieves that you may find of interest if you haven’t read it before or in recent memory).

As a deterrent to tractor theft, one of the means thieves use to get away with precious cargo, Alkire recommended the “parking brake cuff by War-Lok,” he wrote, “when parked and leaving truck/trailer for any length of time. If companies and some drivers would invest in and use  the [many different] security packages offered by them, lots of thefts would be stopped.”

The War-Lok company also makes kingpin and gladhand locks, trailer-door locks and other devices. Of the “parking brake cuff” (pictured), wrote Alkire, “to get the cuff off without a key the thief  will have to break the valves off, and that will render the truck  immovable — $150 to replace the valves is so much cheaper than losing the load. I use the cuff on my truck whether I am loaded or not, and even when bobtail. I park it and I install the cuff. Peace of mind is priceless, and I know I will still have a truck when I come out of the  building at the truck stop, rest area or where I park it. They might steal the TV and CB, but not the truck.”

As for a Tyson’s load thieves in Atlanta attempted to boost over the weekend, the brake lock wouldn’t have helped (they reportedly were attempting to pry open the trailer’s doors to off-load the cargo directly) — but it’s OK, police intervened before the thieves got very far, thanks to tips from drivers about thefts in the area. In the ensuing mess, one officer was hit by the criminals’ vehicle. Anybody with tips in the Atlanta area, read this story about it. 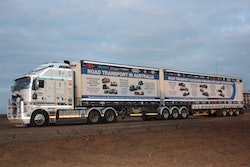 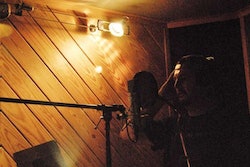 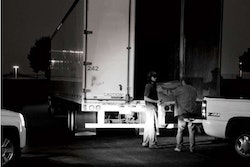 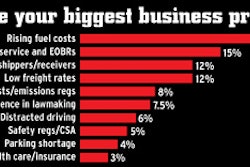