Sleep apnea back front and center of health/safety conversation 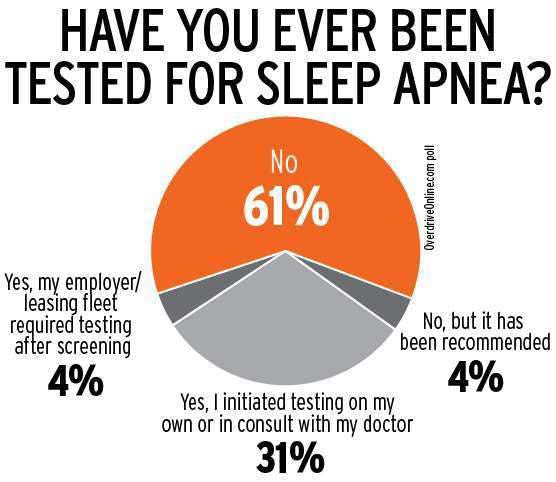 2014 results of this polling showed a majority of truckers hadn’t ever been tested for sleep apnea. That year was the first in which drivers were required to utilize a medical examiner on the National Registry of examiners, mandatory training for which (for doctors) included a variety of screening protocols for apnea, given no single regulation or guidance in place. What’s been your experience since that time? Find an updated poll below.

Regular readers will recall the study released back in March that showed Schneider National drivers who left sleep apnea untreated were more likely to have a preventable crash than those who were treated and kept up with the treatment (using a CPAP machine). The full story, if you missed it, covered the basics of the study’s conclusions as published in the journal Sleep:

Conveniently, I suppose, for regulators, the study release came directly on the heels of the Federal Motor Carrier Safety Administration’s release of its Advance Notice of Proposed Rulemaking requesting truckers and other industry stakeholders weigh in on a bevy of questions about the condition, its relevance to safety and its treatment and screening. (Find a full list of those questions here in a story published yesterday, also outlining a series of listening sessions coming up and other avenues toward weighing in with your experience with apnea testing and treatment.)

The Owner-Operator Independent Drivers Association promptly took issue with several elements of the study. Those ranged from selection bias/lack of a reflection of the wider industry (the study was focused specifically on Schneider National drivers, and study authors “failed to mention [this and other] limitations of the study in their public statement,” OOIDA said) to the declining number of drivers in the non-treated group over the course of the study as they quit or were terminated. Potential conflicts of interest, too, were alleged.

A big point of contention in sleep apnea testing being a requirement, following some screening protocol for those to be tested tied simply to body mass index or some other physical measurement, is the cost of such testing for drivers, of course. In Schneider’s program, OOIDA says, that issue was moot given Schneider paid for the testing as well as the treatment for drivers found to have the condition.

Along those lines, OOIDA Foundation Researcher Andrew King, as quoted in Land Line’s story, had this to say about an interesting finding of the research:

Those who had the physical characteristics of someone who had sleep apnea but tested negative did not have higher crash rates than [those who didn’t have apnea] … But if [testing] hadn’t been paid for by Schneider, they sure would be out a lot more money than the others.

Should such drivers, simply because they’re overweight, be forced to take on the cost of testing?

Read the full story at this link.

That is sure to be a topic of discussion in the upcoming apnea listening sessions. Notwithstanding those concerns, Truckers for a Cause cofounder Bob Stanton, writing for the “Sleep Scholar” website, argues that the study provides exactly what OOIDA has long argued didn’t exist: sound peer-reviewed science on apnea and crash risk.

In his story, Stanton calls the study “good research, using both excellent medical criteria combined with the best of transportation accident analysis to make not only a clear crash risk correlation but make it in preventable crash[es,] where all reasonably confounding variables from a transportation crash research standpoint were also controlled.”

Stanton, an OOIDA member and working over-the-road driver, as regular readers will know, included in his Sleep Scholar post a letter to the editor of Land Line he felt unlikely to actually run in the magazine, given its length. You can read for yourself at this link. He comes to this conclusion:

Instead of trying to question the objectivity of the study, drivers and OOIDA should be chalking this up as a win. Anyone who knows a lot about a particular subject has to make a living. In my opinion the conflicts of interest and objectivity problems raised in the OOIDA article are not valid.

Read the full letter here. What do you think?

Stanton notes the study’s authors were at press time scheduled to appear on the Sirius XM Road Dog channel next week Thursday, May 12. Stanton says the authors are scheduled for 1-2 p.m. Central, during the first FMCSA listening session on the condition in D.C.

Nonetheless, “This should be an interesting show for drivers interested in sleep apnea,” he says. 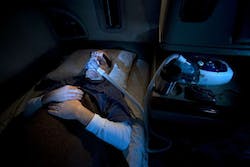 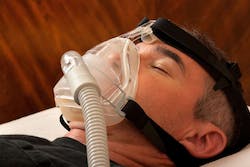 Getting to FMCSA’s sleep apnea listening sessions May 12, 17 and 25