Carl Rhodes of Tunnelton, W.Va., hauled coal in around his home base (near Morgantown) from the age of 13, says his son, Rick Rhodes, who got in touch recently to note that his father had passed on in August. “So many guys came to see him,” Rhodes said, given the elder Rhodes long history in the community, much of it centered around his trucking businesses. “Each had several ‘Carl Stories.’

“A biker came up to my youngest daughter and said, ‘Your Granddad gave me a job when no one else would even talk to me. He said, “If you will finish high school, I will give you a gold watch.”‘ He finished school and got a watch — and had a job.

Rick’s son Adam performed the celebration service, available in webcast via this link.

The elder Rhodes has been a fixture of Morgantown-area trucking business since his own father hauled pulpwood in a 1932 Ford from the mountains above Westernport, Md., and Carl got his start in the local coal business.

He got pretty good at backing the dumps up onto a steep tipple to get the coal “into a bin where they’d unload then into a railcar,” said Rick. So good, in fact, that “older drivers would have him back their trucks up on that tipple for them.”

Talking to Rick, it’s pretty clear the kind of kid his dad was, likewise the kind of man he would become — not one to be denied an opportunity to find ways to do a job better than the rest. “When my granddad hauled to Westernport,” Rick said, “dad would sneak out the back door and take a shortcut across the backyard to beat granddad to where he was going. When he got to the truck, dad would be waiting in the passenger seat for him.”

Carl Rhodes would drive truck for his dad for time in the late 1940s, before he joined the 101st Airborne during the Korean war. “Two weeks before he was supposed to go to Korea it ended,” Rick said, and “he went to Germany and did his time there.” Interestingly, when Rick’s mother, Sandra Jean Rhodes, who passed in 2017, went to Germany to be with Carl in the service, they toured Germany for a time on a bicycle “with a 28cc Lohmann diesel motor on it,” Rick said.

When Rhodes was back in the states after his military service, he shortly bought his own truck. “I think it was a 1956 Ford,” Rick said, “and he hauled coal during the day, and he would run the shovel on the strip job at night. One time he was hauling on a strip job, he backed into where they were loading. The shovel operator was on a break, and up on the hill was the owner of the strip mine and a coal broker. He loaded his truck and got in there and left. The coal broker said, ‘I’ve never seen that — a truck driver running a shovel!'”

The mine’s owner might not have seen it either, Rick suggests, but nonetheless said, “Well, all my shovel operators can drive truck.”

Carl’s instincts for trucking business-process improvements are well in evidence throughout his career, his son says. In the 1980s, around the time the Rhodes bought a pair of LTA9000 Fords (one of which was featured in Overdrive around 1990 as Tractor of the Month), the family’s fleet was hauling incinerator ash out of a decommissioned incinerator in Philadelphia back to a landfill in Lancaster, Ohio. “Dad was nearing 60 then, and he ran a load out there for me one day.” At the landfill, “all us dumb truck drivers kept telling these engineers to build us a limestone pad to drive the trucks back onto and dump the ash, then push it out with a dozer,” given issues with trucks having a time of it on the soft ground at the top of the landfill.

“I had a doctor’s appointment,” Rick said, so “dad picked up a 1988 Peterbilt I had at the time and went out there. He backed the truck out across the landfill, and when he started to see the wheels settling, he raised the dump trail up. The spotter jumped all over him. Dad said, ‘I’m dumping this trailer.'”

The spotter: “Dump it where I tell you to or you’ll take it back to Philadelphia.”

Rhodes: “Well, I could haul it back, and it wouldn’t be the first time I’ve done that, but there’s just one more thing I’ll do before I go.”

A carefully worded suggestion of bodily injury following, something Rhodes figured might get him and others delivering there down the road toward a better situation. “You just dump it where you want,” the spotter said, finally. As Rick put it, “They started listening to us dumb truck drivers after that. They built us a pad, doubled or tripled the number of trucks you could get in and out of this place.”

Rhodes’ road to the Tronagun fleet
As Rick tells the story, after military service his dad first went into business on his own in Parkersburg, W.Va., in tandem with his brother at the head of a small fleet called Rhodes Brothers. “They sold out to a guy in Morgantown, then he was in the Western Auto business and kept seeing dump trucks hauling coal past the store. Sometime in the ’60s he moved back home to Tunnelton” and wanted a trucking-company name no one else already had.

Yes, Rhodes was “tryin’ again” with trucking, and thus “Tronagun” was born.

Rick himself started on with his dad in the 1970s, about the time Carl “bought two brand-new Brockways. We had older Fords with 534 gas engines – when I started, I drove one of them, then graduated up to an LT9000 with a 318 Detroit. Dad taught these coal brokers in that area how to dip the slurry ponds to get the fine coal out – that was his first job. He kind of perfected that.”

Then “guys that had the coal water kept pushing him harder and harder” and eventually squeezed them out with another fleet that, against Rhodes’ advice on just how much fine coal could be extracted from slurry, agreed to haul more product. Eventually, Rhodes was proven right when a Cat D9 dozer was lost because “they didn’t listen to my dad and hauled stuff in there that had too much water in it.”

Rick noted that Mike Matlick preached part of Carl’s celebration service last month. Matlick’s father, Carl Matlick, “drove one of the Brockways” the Rhodes owned at the time. “At 18, Mike himself drove an N model Ford when we helped build I-79 through Clarksburg. It was his second job. He became a successful mechanic for the Cummins dealer in Fairmont, West Virginia.”

Tronagun went on to specialize in asbestos and other remediation through much of the latter part of the century, hauling “asbestos out of schools and hospitals and other public buildings for about 20 years,” Rick said, and following 911 worked on a Pentagon demo/reconstruction project as well, among much other business.

Join us, and no doubt Rick, in wishing Carl what would have been an 88th birthday come November 6. Condolences from all of us to the family and all who knew him. A bit more from his long history in trucking follows. 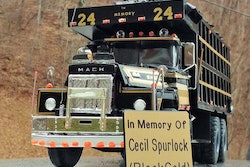