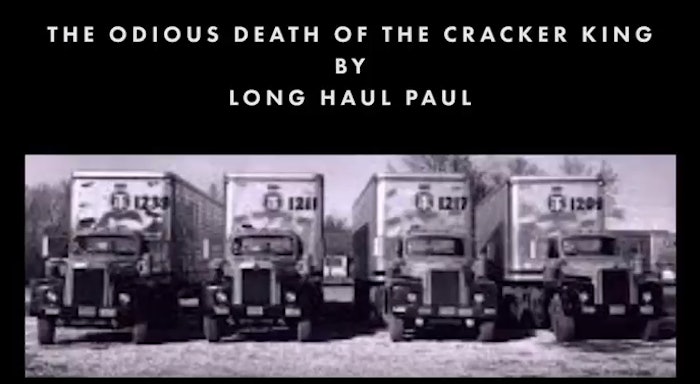 This remains one of my favorites from trucker Paul Marhoefer, based in Muncie, Ind., and making more of a name for himself for his mostly acoustic folk and blues tunes since participation in Overdrive‘s Trucker Talent Search a couple years back. Much of his music channels his long history as an owner-operator — both positive and negative aspects of that legacy — and this one’s no exception.

His “Odious Death of the Cracker King” tells the story of a fictional character in the title, which Marhoefer describes as something of a composite of two men he’d known long ago, the “sons of outlaw bull haulers” both, plus a little of that mythic dirge treatment Marhoefer’s a master of.

The video treatment he pulled together with Tex Crowley’s help and stills from his own hauling past and that of family and friends. It landed Dec. 24, 2017, a week after the ELD mandate dropped. Catch the vid above and the track at the head of our “Music to Truck By” playlist of good driving music and more from the variety of trucker-songwriters we’ve covered in years past.

Find more from Marhoefer down the line in the playlist after the track: