I’ve been out at a conference of the Specialized Carriers & Rigging Association in Charlotte, N.C. the last couple of days, hearing stories of super loads and plenty talk of technology, much of it as it pertains to incremental moves toward more automation and harmonization of the state-to-state patchwork of permit rules and procedures in place today.

More on all of that later, including an appearance from the relatively new FMCSA Acting Administrator Jim Mullen, but today I thought I’d share an SC&RA video from last year we hadn’t reported on previously, detailing the finalists in SC&RA’s “Hauling Job of the Year” competition. 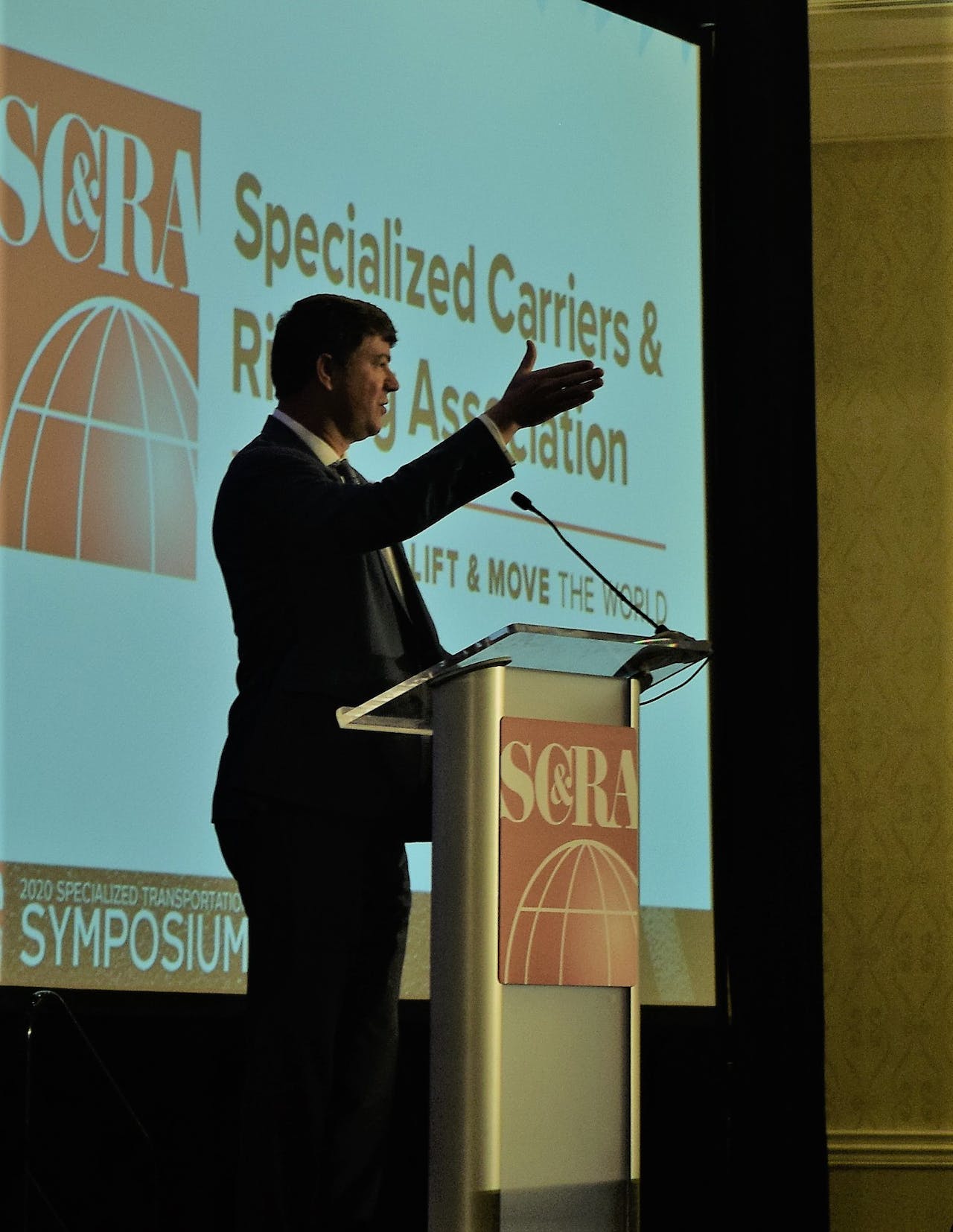 I sat in on a presentation about the program this morning, and, attention heavy haulers, this competition’s submissions period is open through the end of the month — coming soon, so time is short. Visit the association’s website to find out how you can enter a job in one of four categories — under 160,000 lbs., 160,000-500,000 lbs, 500,000-lb.-plus super loads, and “Moving,” dedicated to hauls “using specialized equipment, such as self-propelled transporters, dollies and crawler assemblies. Transport must be evident.”

From the presentation of the winners early this morning, I learned a little more about four of these particular hauls, named winners in the competition: 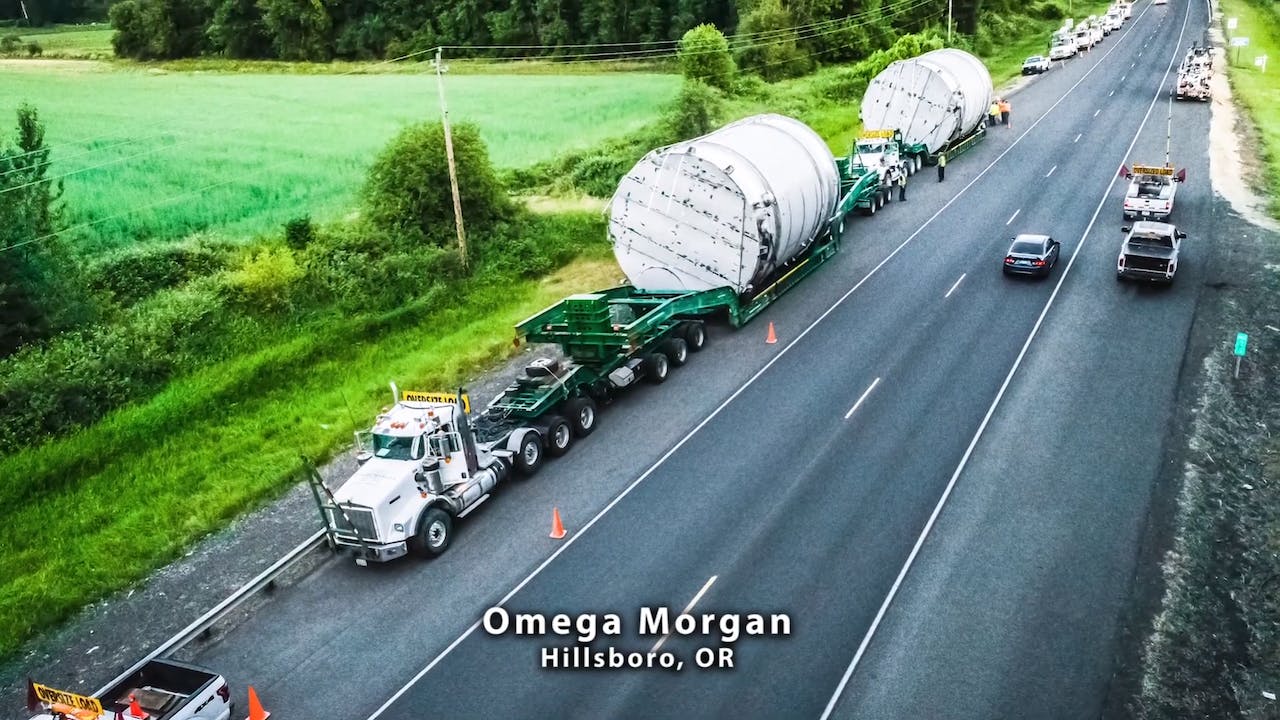 When Omega Morgan was hired to move these tanks, several routing and safety challenges faced the convoy, which consisted of more than 20 vehicles all told, arrayed in a convoy with two pilot cars ahead of and behind, and separating, the two haul vehicles, also including an array of bucket trucks from numerous utilities along the way. The company found a route that could accommodate two simultaneous loads and engineered a crane load of the tanks onto the deck trailers. When local power companies wanted to avoid subcontracting the work of lifting and removing all of the associated electrical wires, Omega sourced, directed and coordinated the efforts of a number of different utility companies for the duration of the haul. In all, Omega put in more than 1,000 man-hours and navigated a large and intricate haul across mostly two-lane roads with no incidents — and on-budget. 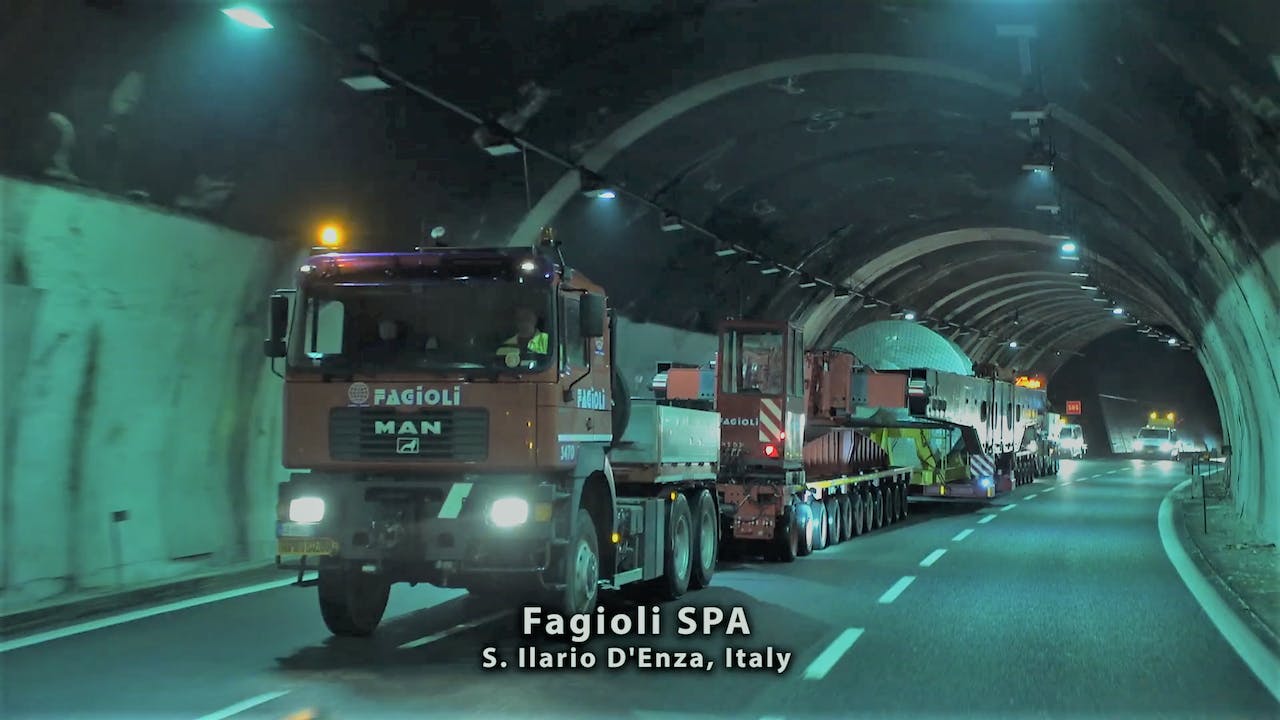 In spring 2018, Fagioli moved two 170-ton rotors via roadway to a power plant located in the mountains of Premadio – 1,250 meters above sea level. Two low-capacity bridges on the route to Premadio (which traversed three different Italian regions) had to be mitigated via the installation of over-bridge structures, and narrow roads through small towns with roundabouts proved challenging for the convoy. Other over-bridge structures and bridge reinforcements had to be engineered on the spot during the haul as well. After nine nights in transit, the final leg of the haul proved the most difficult, when a steep slope resulted in a third convoy modification before the rotors were finally able to be installed in their new location. 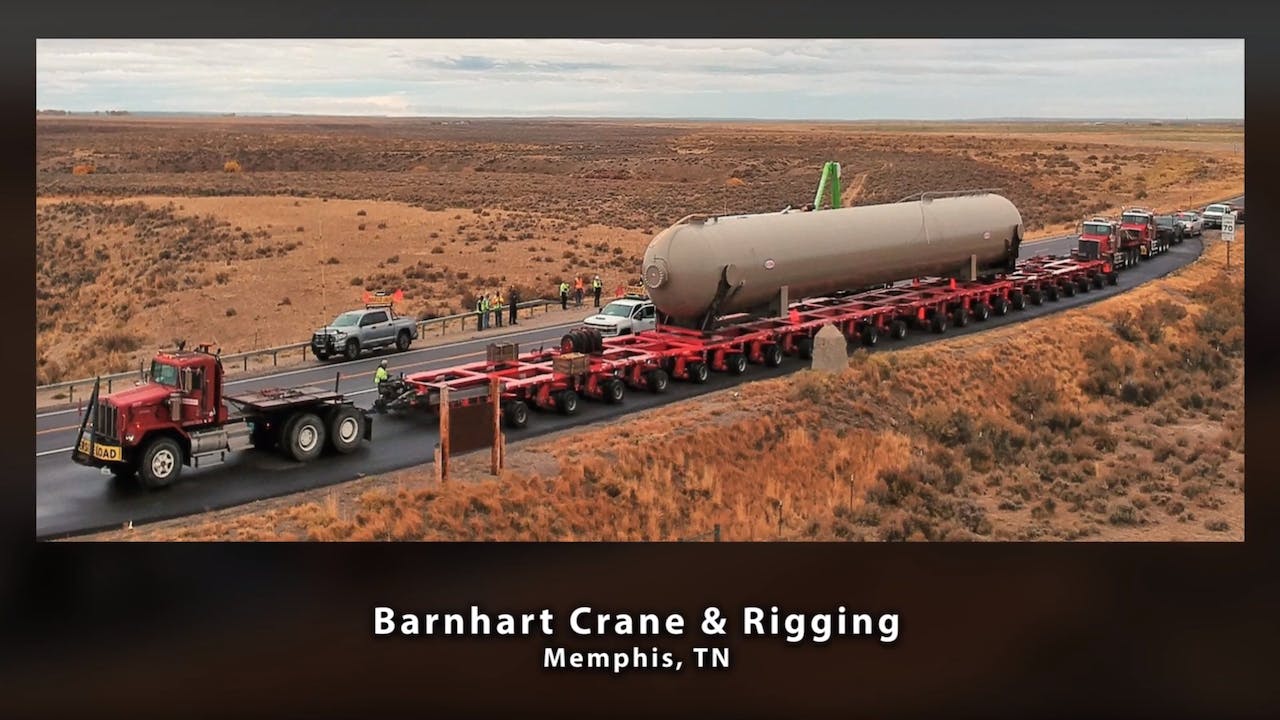 In fall 2018, Barnhart Crane & Rigging started planning this move of three 644,000-pound vessels from Pocatello, Idaho, to Fort Lupton, Colorado. The move would ultimately cross three states (and their respective laws and regulations) and require 7,667 man-hours. In addition to the difficulties posed by each state’s various requirements, winter conditions, curfew hours for oversize loads and bridge crossing restrictions made for a challenging haul. The project began in October and was completed in December of 2018. At the SC&RA event, the complexities of this move were apparent in the bridge analyses required by the three states through which the haul would run — Idaho, Wyoming, and Colorado. The route through the state of Wyoming between origin and destination states proved challenging as the route that was (eventually, after plenty analysis by the state bridge department) approved included four bridges out of 14 total that would be unable to support the weight. For ultimate approval, Barnhart, noted company rep Ragan Watson, utilized some common maneuvers — bypassing a bridge via county roads, a “crab steering” maneuver with the modular trailer to spread the load’s width as much as possible laterally across the bridge’s span — and some relatively uncommon ones (wing dollies supported with custom-built mounting bracketry). 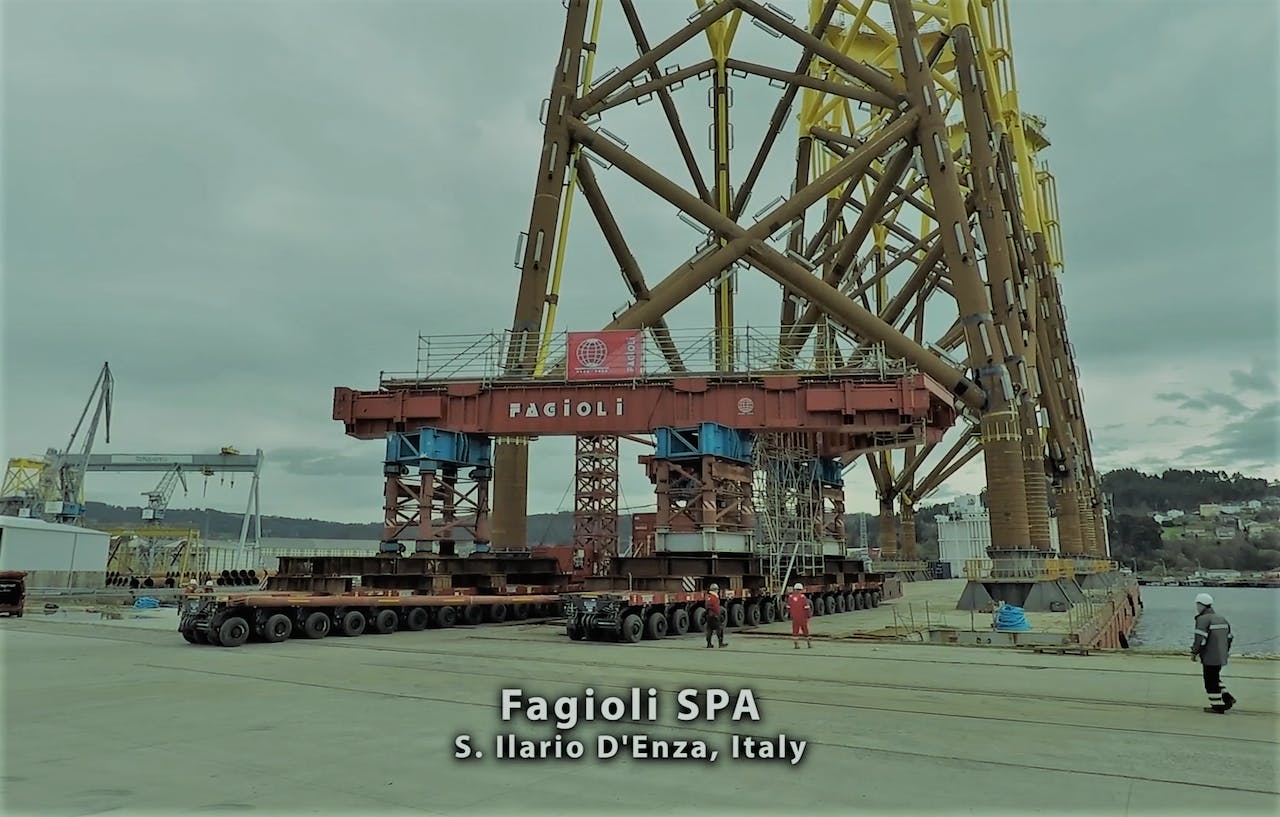 Fagioli’s jacket transport job in spring 2018 involved five different types of jacket structures, each with its own dimensions, that had to be quickly and safely loaded out (despite wind and other weather concerns) onto the 11 nearby barges planned for sea transport of the jackets. Fagioli came up with the idea to construct a custom frame structure to handle the complex load-outs and varying dimensions and weights of the jackets. All the beams and equipment in the custom structure underwent FEM software checks to evaluate bending moments and structural capacity. The main challenge was to create a frame structure that could lift the jackets during the load-out, but Fagioli was able to engineer a solution that involved retractable-edge main beams with movable stoppers.
Related Stories 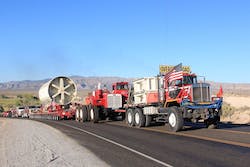 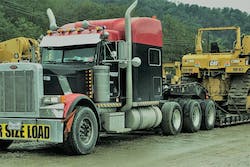 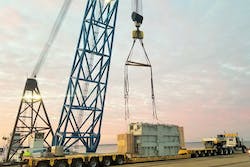 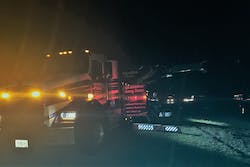