Todd Dills
Jan 12, 2021
If you're one of the untold number of owner-operators who took an SBA disaster loan in the spring of 2020 -- the generous terms and deferred payments were attractive carrots in those uncertain times -- last month you may well have been contacted by the SBA in what appears to be somewhat routine auditing of proof of insurance required for the loans.

Three-truck S2 Transport co-owner Steve Libertore, also a trucking-focused insurance agent with the Kincaid Insurance Group, was contacted by SBA for this purpose in December after haven taken an SBA loan earlier in the year. For Libertore, it was a routine matter, really. S2 was "contacted in December for proof of coverage. I only needed to provide a certificate of insurance for my assets and the underwriter put that in the file."

Those assets? "We only have the trucks and trailers," Libertore said, "so they are covered under the physical damage policy."

As is the case for many an owner-operator business, whether a single truck or more. For Arizona-based owner-operator Lance Buttermore, though, the SBA office of disaster assistance rep that contacted him asked for something initially that he thought he didn't have -- "hazard insurance." What kind of insurance exactly? he asked. The SBA rep used the "business contents and personal property" phrase to describe the insurance.

Buttermore made note of his Gallagher policy, covering his 2015 Kenworth T680 (find a picture at the bottom of the story). The policy also "covers contents in the vehicle," he said, including "my laptop that I rarely use that is inside this vehicle. We have theft coverage, too." But the language Buttermore used for the coverage -- physical damage -- given it did not include the phrase the SBA rep used, wasn't passing muster in her view.

Buttermore did some cursory research and figured he could get so-called "business contents insurance ... for about $50 a month." Yet an out-of-the-blue contact from SBA asking him to suddenly buy something or be deemed in default on the loan made his spidey senses tingle, as it were, particularly given the well-publicized scam artists surrounding everything COVID-19-relief-related.

"If we were 10 trucks in a home office and such," Buttermore said, insurance on all those non-mobile contents would make sense, but "we’re just one truck trying to make it to five."

Buttermore and his wife, after thinking about it all further, reached out to his local SBA contact in the Phoenix area, "a manager my wife had spoken to" previously, he said. "They told us to send a cutoff email" to the rep he'd been dealing with, because as far as they could tell the physical damage policy well satisfied just what she was looking for.

As it stood when we talked just before the beginning of the year, Buttermore had not "received any further emails."

His payback on the loan, assuming everything's in order as it appears to be, will begin in June, a year from when he originally received the loan.

During all of this, when Buttermore called to have Gallagher send in his proof of physical damage insurance, he asked whether others were having similar issues. His insurance company rep said, "You’re like the 10th truck driver today who had the same problem."

For those of you who've taken SBA EIDL loans above a certain amount -- $25K, Buttermore said -- did your insurance confirmation go similarly or more smoothly? Drop us a comment below with your story.

A note on our new comments plugin, if you haven't made a comment here at Overdrive since our new site went live Friday, January 8: For our regular commenters and everybody else as well -- we still want to hear from you on these stories. For the new comments plugin, you'll need only to sign into the site with an email address. It should function fine for you thereafter. When you first enter your email to sign up, you'll receive an email from the system with a confirmation link you'll need to follow back to the site to then comment. If you have issues with it, reach out to me directly at tdills [at] randallreilly.com.

Adventures in a temporary niche out West

When I spoke with owner-op Buttermore a couple weeks back, he was on a series of short-haul container runs working a Landstar agent's relatively new piece of business out of the Port of Long Beach with his 2015 KW (pictured above).

"They pay you really well" for what amounts to a 32-mile round trip, about the size of the actual haul, he said, though his first time navigating the chassis pools and the like at the mammoth complex definitely wasn't steady as she goes. It was a bit of a "headache," he added, "because you have to know where to go and get your chassis. You’d get out of the truck and try to talk to security, but they act like you’re a leper" in that hottest of COVID hotspots in the U.S. these days, Los Angeles.

He told of one particular security man who was doing his best to help out in a car.

"He was trying to tell me to follow him by driving around in circles. I'm like, 'What is this?' He's looking at me like I’m crazy, throwing his hands up like, 'Why aren’t you moving?'" He just kept driving round and round and round. "He finally motioned to me to follow," guiding Buttermore to where he could wait. "He gave me the sign-language version of 'take a nap.' I sat there for another two hours. Then they said go get a chassis."

Long story short, he'd arrived at 7 a.m. and was given a midnight-1 a.m. appointment that then ate up a few more hours. He well understands why he was being paid $50/mile. "You have to try to turn it around," to look on the bright side about essentially waiting around all day for the load. "If you don’t, you’ll dwell on how bad it is – and you won’t want to do it," though the money makes it worthwhile. "When I see numbers like that, I don’t care what I’m doing."

Since then, Buttermore reports, he's back in front of a step deck leased from the carrier (also pictured, above), after it spent some time in the shop. 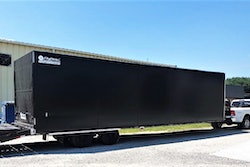 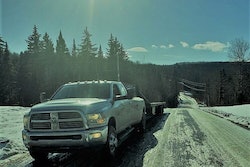 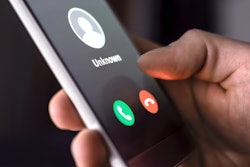