There is no pairing of photos I could come up with that better exemplifies the years-long restoration of the piece of history that is Evel Knievel's former Mack haul rig than the two above. I took both, the first (left) on the occasion of the rig's arrival at the small fleet and sometime custom shop of BPW Transport owner-operator Brad Wike in Lincolnton, N.C., in February 2012, the second upon unveiling of the resto job at the Great American Trucking Show in August of 2015.

Both feature the same man who, though the rig was never his to do with just what he would, is synonymous with its revival in my mind -- Robb Mariani.

Mariani's familiar to many readers as the man behind the "American Trucker" TV series that caught the eyes of so many among owner-operators in the early part of the decade on the Speed Channel. Mariani's subsequent involvement in all manner of trucking business-, culture- and history-related efforts, too, did their part to remind Overdrive readers of the man Truckers News memorably called "Trucking's biggest fan."

His obsession began with his grandfather's Overdrive subscription, as he told around the time of his television show's debut. The story of the Evel Knievel 1974 Mack's rebirth starts there, too, with the "Finding Evel" episode of the show in Season 2, premiering in September of 2011.

There, Mariani and crew documented the then-current location of the 1974 Mack FS700L cabover and Post Coach living quarters, rescued from the weeds in a yard in Clearwater, Fla. The trailer was with it, all  still showcasing faded signage from Knievel's touring days of motorcycle-jumping and other daredevilry.

With time, the resto project, thanks in part to Mariani's and others' efforts at promoting the value of the project, found a buyer in motorcycle and Knievel enthusiast and collector Lathan McKay. It landed for the finale with Mike Patterson of Historic Harley-Davidson in Topeka, Kansas, to finish up entirely in 2015. Patterson then told Overdrive that his dealership was one of the more than 96 partner individuals and businesses that contributed to the truck and trailer’s full restoration, managed by Patterson’s shop over the preceding year and a half.

Patterson was drawn into the project after McKay, an ex-pro skateboarder, actor and Knievel memorabilia collector, “called simply for advice for somebody who could restore the truck.” Patterson “blurted out that we restore Mack trucks,” he recalled, and McKay “believed me.”

“We teamed with Kansas Powertrain in Topeka,” which rebuilt both the chassis and motor in the tractor, and “Topeka Trailer for the trailer portion of it,” Patterson said then. “Todd Williams, nationally known for restoration of all kinds of vehicles, did the restoration of the cab.”

Mariani remained to tell the tale and emphasize the importance of the unit for the trucking community throughout the years-long process.

For the world of trucking, the combination unit made a triumphant debut at events late in the summer of 2015 as it began a Mack-sponsored tour, including a stop at the Great American Trucking Show in Dallas that year.

Two Mack Pinnacles hauled the truck to appearances across the country through 2016, then it came to rest in a newly built Knievel museum at Historic Harley-Davidson in Topeka, Kan.

Read more in this series of stories attendant to Overdrive's 2021 60th anniversary. 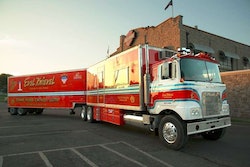 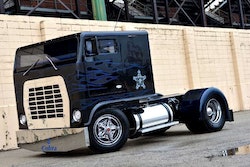