Bruce Smith of Kilgore, Texas, hauls frac sand in this 2009 Peterbilt 389 owned by Southern Transport. The truck is powered by a 600-hp Cummins and an 18-speed Eaton Fuller, and the trailer is a Stevens 2008 pneumatic tanker. Smith and Thomas Ivy, owner of Southern Transport, named the truck after the way Ivy continually invests in the truck’s custom look. Few Dollars More won fourth in its category at the 2008 Great West Truck Show Pride & Polish. It has a flip bumper, custom rear bumper engraved with the company name, 8-in. straight stacks and an Outlaw Customs twisted chrome gearshift. “You can never have too much chrome,” says Smith.

Todd Easterling of Caldwell, Texas, hauls steel coils and lumber from the East Coast to the Midwest for WTI Transport in this 2002 International 9900i. Big Bertha is powered by a 475-hp Caterpillar and a 10-speed Eaton Fuller. Easterling says he’s looking forward to “dolling her up” by adding chrome accessories.

John Steed of Grand Junction, Colo., owns this 2004 Kenworth W900L, which took home first in its category at the 2009 Louisville, Ky., Pride & Polish. The truck is powered by a Caterpillar that has been modified to 1,500-hp and an 18-speed transmission. Steed’s company, Henderson Heavy Haul, hauls windmill blades through the Rocky Mountains. His son installed LED lights on the roof; powder-coated the grille covers, bumper, fuel tanks and steps; and added a custom headache rack, red brake drums and polished aluminum wheels to prepare the truck for show.

Hank Good of Monticello, N.Y., owns this 1981 Kenworth K-100C VIT Aerodyne, powered by a 500-hp Detroit Diesel. Good restored the old cabover, giving it a custom paint job and adding 232 Truck-Lite LED lights to the cab. An outline of his initials lights up on the grille. The working show truck has been to Holland, Germany, Sweden, Poland and Finland as part of an international good will truck show tour. 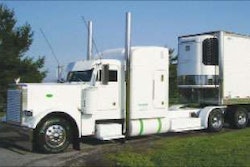 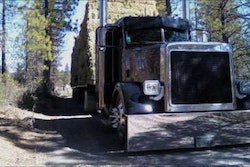 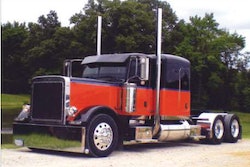 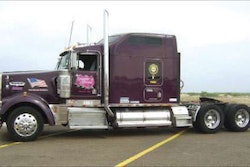