Check out this workhorse: Don Cooper’s 379

“Check out this workhorse,” wrote Mike Zipperer accompanying this and two other pictures of a combo that visited the engine/parts shop he helps run in Mayo, Fla., likewise an arm of the T.W. Byrd’s Sons logging outfit. Zipperer calls himself a trucking hobbyist of sorts, in addition to his primary mechanic work, and he knows a sharp unit when he sees it.

“I don’t know whether my son did that or if they were like that when he bought it,” owner Don Cooper of Cooper Farms in nearby McAlpin says of the 1998 Peterbilt 379 tractor’s internal-breather treatment, covered by the rooster shield pictured here.

Cooper’s run the rig hauling dry bulk fertilizer in Killibrew-type side-dumping trailers like the one pictured, with his son, for four or five years. On the farm they raise some cattle and grow hay, which they haul out on flatbeds and dry vans with a 1998 Freightliner Classic and a 1997 Century Class as well.

Other than lettering the Cooper Farms name on the doors, the rig was more or less as is when they got it, Cooper’s son buying it and then selling to his father.

Says Zipperer, “Don came in looking for some parts” — the tractor, he felt, was well worth the the time spent on a few photos. We concur. 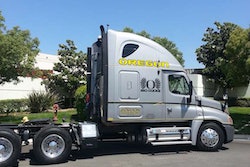 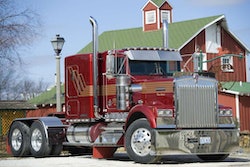 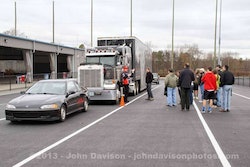 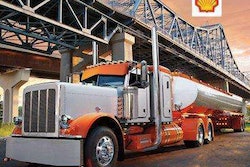