Helping hands are hard to find

The Precious is wearing new vinyl, just in time for MATS. George spent his last day home putting them on, and he did an awesome job. I, of course, helped by merely being present and occasionally handing him something, which is pretty much my function in life. I show up and hand people things. It doesn’t sound like much, but just wait til you’re somewhere and need something handed to you and there’s no one to do it. You’ll wish you had a helper.

I’ve been excused from handing tools since the boy got big enough to do it. I’m not familiar with wrenches and stuff — an upholstery hammer is pretty much the extent of my tool use. I will say my numerous and innovative ways to use an upholstery hammer are far-reaching and, in my opinion, brilliant. I once knocked the cork out of a wine bottle with one. Straining glass through my teeth while drinking the wine was kind of a drag, but hey, I got the damn job done. I have also since added a corkscrew to each of the bug-out bags, to avoid having to go through such unnecessary stress when the zombie apocalypse comes and I’m in need of libation.

The job of “official hander” comes with the unfortunate burden of having to know where everything is. Let’s face it, you can’t hand anyone anything unless you know where to find it first. Not only do you have the responsibility of knowing where to find it, you have to keep up with all of it after you hand it to people. This is a real conversation that actually happened in my house, and as the official hander of things, it wasn’t unusual to me at all.

“Mom, I need that piece of paper.”

“Which piece of paper, the green one or the pink one?”

“Oh. That narrows it down to the nine thousand pieces of white paper I currently have the location of cataloged in my head. Any other clues?”

“It has writing on it. About the library. I showed it to you.”

And miraculously, like the guy on Wheel of Fortune who solved the entire puzzle with two letters, I know precisely what piece of paper he’s talking about.

“It’s in the pocket of your black pants.”

“Where are my black pants?”

This is where the handing part comes in, because I’m usually too busy to go through the “Who’s on first” routine, so I find his black pants and hand them to him. With the piece of paper in the pocket, just like I told him. Bam.

Never underestimate the value of good help. Who else is going to hand you stuff? 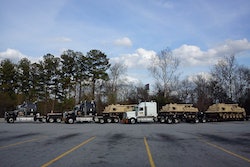 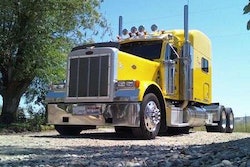 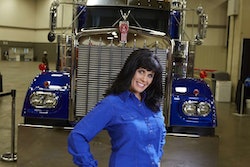 Showing off at GATS: Tina Comer and a classic custom Kenworth