Though the working rigs tend to dominate the headlines around Shell Rotella’s annual SuperRigs show, this year there was a firecracker of a truck at the top of the judges’ list in the show-truck category: the “Low Patrol” 1974 Ford W9000 cabover custom rig of “trucking’s biggest fan” Robb Mariani. Pictured above, Mariani bought the rig, with its original 290 Cummins and Rockwell 3:73 rear end (which remain today) and only 53,000 original miles, in 2004 from a car-lot owner in Smithville, Tenn., who himself had purchased it years earlier at an auction conducted by the Tennessee Highway Patrol years ago, where it’d served a long life but logged a very few 38,000 miles.

After Mariani bought it, he then featured it in Season 1 of his American Trucker series on the Speed Channel. “I went to Mexico [in that episode] looking for parts for it,” he says.

When he was visited by then Overdrive sister magazine Truckers News editor Randy Grider for the story at this link, originally published in 2011, he’d painted the entire rig black and had it mostly parked for safe keeping at Bill’s Truck Repair in Sanford, Fla. “I wasn’t really sure how to restore it” or what work exactly to put into it, says Mariani. “The interest in doing a hot rod was in the background. There’s a guy in Texas who did a Blue Mule [from the classic White Line Fever film] replica – a very nice truck.” A friend of Mariani’s longtime associate, Lincolnton, N.C.-based small fleet and Brad’s Classic Trucks owner Brad Wike, had started a Blue Mule replica at the time, too — “it’s ready for paint now,” Mariani adds today.

Going a quite different route with his own 1974 Ford then began to seem more and more appropriate, something to “steal a little thunder” on the truck-show circuit, really turn some heads. By fall of 2012, Mariani had long established himself in work representing Cobra Electronics and Wike called him up to Wike’s annual classic-truck show — Mariani calls it “Brad’s Southern Classic,” unofficially, a big event featuring a bevy of classic and custom trucks. Wike “wanted me to show [the 1974 Ford] as an unrestored truck,” Mariani says, Wike also suggesting the two could afterward put some work into it at the on-site shop.

Modest intentions, however, in the year and a half saga that ensued morphed into something else entirely. “Unfortunately,” says Mariani, “I’m an anal-retentive perfectionist.” Like Ishmael and the white whale, longtime designer Mariani strove to fit the vision in his mind to reality. As he and Wike continued working on it intermittently through 2013 and on into this year, the vision of a true big-rig hot rod kept them on their toes before its ultimate debut in the Cobra Electronics booth at the Mid-America Trucking Show in March this year.

Follow through some of the work on and finished features of the truck with the photos below. A gallery of images follows at bottom.

And if you haven’t seen the rig in person as yet, you may well get a chance at a Pride & Polish event coming soon. Stay tuned. 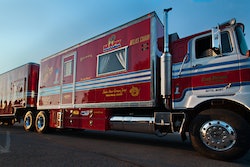 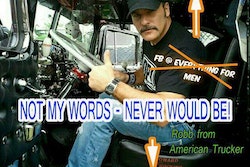 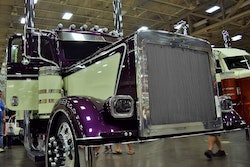