Jake Lindamood of Irving, Texas, is back, and his hard-hitting heavy haulers are more beautiful than ever. Lindamood, vice president of Lindamood Demolition, captured the Best of Show trophy at the 34th annual Shell Rotella SuperRigs truck competition, held June 9-11, 2016, in Joplin, Missouri. His 1988 Peterbilt 379 beat out 88 other contestants while netting $15,000 in prize money ($10,000 from Shell Rotella and $5,000 from MAC Trailer) and a coveted spot in the 2017 Shell Rotella SuperRigs calendar.

Lindamood is no stranger to the winner’s circle: In 2009, he took third place in the tractor division for his orange 2007 Peterbilt 379. That same year, he earned a spot in the 2010 Shell Rotella SuperRigs calendar alongside his father, the late Bobby Lindamood Sr., with his brown 2007 Peterbilt 379.

This year’s winning entry was a unanimous favorite among the five judges, who were impressed not only by the Peterbilt’s classic silver and blue theme, but also by its pristine condition.

It wasn’t always that way. In fact, the silver beauty originally sported black paint with orange flames. Five years ago, it was totaled and left to rust into obscurity.

But Jake Lindamood doesn’t give up — not on people, nor jobs, nor trucks. He knew what the truck could be, so he and his crew got busy. Well, busier.

The workday begins shortly after daybreak at Lindamood Demolition, located in Irving, Texas. Jake’s father founded the company in 1974, and since then, they have grown into a Texas-sized heavyweight, with approximately 120 employees, 40 drivers, and 70 power units. They specialize in commercial and residential demolition, excavation and heavy hauling, and have demolished everything from schools to hospitals and apartments. Their most recent acquisition includes a 120-foot high reach boom, which allows them to handle taller buildings where implosions aren’t feasible.

It’s a high intensity job, but that doesn’t faze Lindamood. He learned to drive big rigs at an early age, and by the time he was a teenager, he was leaving school to help out with the family business. Now, he is teaching his oldest son, Jaden, the same lessons his father handed down to him.

Throughout the Peterbilt’s restoration, Jaden remained by his side.

[gtblockquote type=”right” quote_text_size=”24″ quote_text_color=”#1e73be” source=”Eric Harley, SuperRigs judge” source_text_size=”14″]I know how hard Lindamood’s truck works because I’ve seen it myself. What I don’t know is how they keep them in such great shape.

Lindamood knew he would have to come up with a new concept, something unlike the other Peterbilts he had brought to SuperRigs.

In the end, he decided to pay homage to the past by keeping the flames (albeit blue instead of orange) while thoroughly updating everythingeverything under the hood.

“So it’s an ’88 truck that’s basically like a 2015 when we’re done with it,” Lindamood said in “Roadworthy,” a CarbonTV original documentary which focused on some of the SuperRigs contestants’ experience, from preparation to last-minute jitters.

Because the day cab will haul heavy equipment, Lindamood decided to increase storage with a custom “headache rack” behind the cab. An electric switch in the back allows one-touch operation of the shiny chrome doors, sparing them from being marred by fingerprints. It also has one-touch, hideaway loading lights.

The door panels and dash are trimmed out in blue and silver, and the shifter carries out the theme in chrome topped with a blue knob. The headliner features a subtle imprint of gray flames on gray suede.

But at the end of the day, even this show-stopper has a dual life as a workhorse, a point that scored well with the judges. Although SuperRigs is a show for working trucks, Lindamood Demolition puts its trucks through extremes.

“I thought it was remarkable that we all scored it so highly,” says SuperRigs judge Steve Sturgess. “Those heavy haulers, they work hard, and that truck is absolutely impeccable, inside and out. It’s just really nicely done and is a great reflection on the industry.”

“The Lindamood trucks have been very active in many projects in North Texas, including a massive interstate expansion taking place just a mile from my house,” Harley continued. “I know how hard their trucks work because I’ve seen it myself. What I don’t know is how they keep them in such great shape.”

At the end of the day, Jake said, it’s all about family, friends and passing down his father’s legacy of hard work, honesty and humility. But still, everyone likes winning, and it looks like the Lindamoods are becoming well-established in that tradition, too.

“We won Best of Show and got picked for the SuperRigs calendar, which was super exciting,” Lindamood says. “Winning Best of Show was huge, and we are just beyond thrilled about it.” 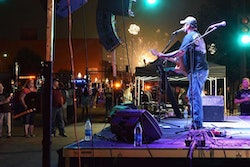 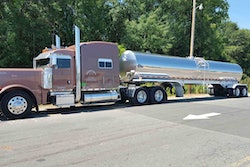 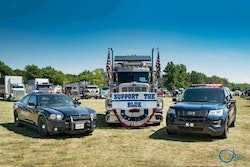 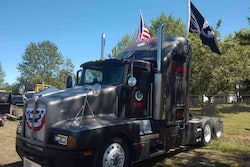