As regular readers will know, “Birdman” Jonathan “J.D.” Terry hauls out of Crossville, Tenn., to areas mainly east of his home base. Hauling 50/50 stones and lumber, as he notes in the Rolling CB Interview conducted by Big Rig Videos’ Chris Fiffie in the video above, Terry was also featured on the blog back in July after his showing at the Crossville, Tenn., edition of Overdrive‘s Pride & Polish. At that time, he did note the on-highway filming with Fiffie that had taken place some months before, after the Pride & Polish in April at the 75 Chrome Shop in Wildwood, Fla. “We did it as I was leaving the Wildwood show headed north on I-75 between Wildwood and Ocala,” he said.

In the interview, he fills Fiffie in on his work with driver-training efforts in his home area, likewise his leadership role in the American Truck Historical Society’s Music City Chapter, encompassing areas in the region around Nashville. Next weekend, if you’re not headed out to the Guilty by Association Truck Show at 4 State Trucks in Joplin, Mo., ATHS Music City is hosting its annual truck show in Cookeville, Tenn., at the Hyder-Burks Agricultural Pavilion, 2390 Gainsboro Grade. Phone number for information: 931-260-5717.

I’m going to miss it again this year (I’ll be in Joplin, for the first time this year), but I’d encourage you to stop in or make plans to show there if you’re in the greater area — you can get an up-close look at Terry’s KW, too, whether or not you can show.

If you missed it from prior coverage, here’s my vid with J.D., in which he runs through his own quite-extensive “driveway” mods to the truck — and the story behind where the independent owner-operator got it: 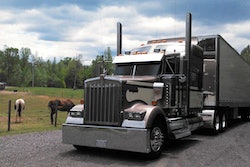 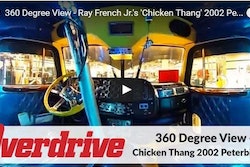