When Chuck Timbrook reached out to me and asked if I would make a video for his truck Blackout I didn't hesitate. This truck is so much more than a cool ride, it's a memorial to the men and women who made the ultimate sacrifice. Chuck Timbrook Black Out

The last several months have been eventful for Chuck Timbrook. Since my last update with Timbrook, during which we discussed his heart surgery and a series of holiday parades where his Black Out 1999 Freightliner Classic was set to appear late last year, he’s found out from his doctor that “my commercial driving days are done,” he says, with his heart operating at around 40 percent of optimal capacity. “I might have to go back next year to put stints in.”

While his financial picture has dimmed a bit, his passion for the veterans-support and -recognition work he’s been doing with Black Out is as bright as ever. “Once I get up in the morning, I can not lay back down,” he says. On tough days, “I’ll do something on the computer – on my good days, I’m up there messing with my truck.”

This week, he’s prepping to take it to a nearby high school’s veterans car show.

He’s gotten a lot done since we last spoke — take a look at the rear memorial box and added flags in the video above, and these pictures from events over the weekend and a photo shoot with a local photographer:

The rig now carries 12 flags, likewise a sound system newly donated by Wicked Sounds of Hagerstown, Md. “They put speakers in my [memorial] box,” Timbrook says, and “10 speakers on the outside of the truck” for a key feature of every event Timbrook participates in — playing the national anthem from Black Out’s stereo for the crowd. “Inside, two giant amps run everything – with 2,000 watts of power. … When I played the national anthem Saturday, it was just crystal clear and beautiful.”

If you participate in the big Rolling Thunder rally in D.C. the day before Memorial Day, look out for Timbrook and Black Out there. And you might find a smaller 1/32 scale model of Black Out available in the near future from California-based New-Ray Toys, he adds.

“I built one and sent them a model,” Timbrook says, referencing a prototype he auctioned off this weekend for near $300, adding to the $3,000 he otherwise raised for veterans in events over the weekend.

And stay tuned on the interior, which Timbrook has also begun to customize. The Twisted Shifters company “out west sent me POW MIA cue balls” for both gear and brake knobs “as a donation to the truck,” he adds, clear evidence of a growing reach for the unit. “There’s events coming up all over with American Legions and the veterans’ motorcycle clubs. My wife said, ‘Well, you can’t work, but at least your schedule is full.’ If I’m going to die, I’m going to go doing something respectful. If I can’t drive truck anymore commercially, I’m not giving up this veterans support thing that I’m doing.” 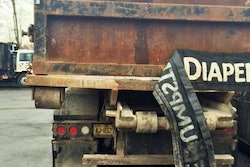