With his health up and down and funding uneven, participation in the big Christmas-parade season around his Martinsburg, W.Va., home region was truncated a bit this past year for Chuck Timbrook, owner-operator of the 1999 Freightliner Classic that is the BlackOut vets-support rig. With a paucity of funding for fuel and some needed repairs as the season ramped up in late November — regular readers will recall his busy weekend schedules from years past — “I did the big ones,” he says, but missed those in “Chambersburg and Winchester,” among others, “because I just didn’t have the funding to fuel the truck. Next season, I’m hoping to tie participation in the events” more clearly to the money required to do them, “so I can start gaining funding to keep it going.”

To that end, BlackOut’s website has begun undergoing something of a redesign. Through it, past-produced BlackOut t-shirts and hats will be made available to those who want to donate in a store section that has yet to be finished. The scale model of BlackOut built in partnership with New Ray toys, too, will be added there, and that model’s gained some distribution in a variety of outlets “all over the country, from Maine to New Mexico and California to Washington State. It’s a great feeling to know the message of ‘never forgotten’ is reaching drivers and families.”

Meanwhile, Timbrook took the extra time afforded in the winter period to build out a makeshift studio in the home shop just feet from where the BlackOut custom Freightliner was itself worked over, and parked between freight-hauling runs before health issues took Timbrook off the commercial road for good. A video series he calls “House of BlackOut” has been ongoing for the last few months. Episodes range from mini-history lessons in past U.S. combat missions and the toll they can take on vets to in-depth, first-person discussions of post-traumatic-stress syndrome (like this linked conversation), with hopes of sharing with others the benefit of his experiences and education with so many vets through the project. “I’m learning from them,” Timbrook says of his efforts with vets, and “hopefully everybody that’s watching who’s not a veteran is learning along with me.”

Since we last spoke to Timbrook in 2018, and updated with images some of the new airbrush paint work on the tribute truck, too, more has been added to parts of the POW-MIA memorial that sits on the frame rails behind the cab.

Also, track back through past significant updates in the history of the BlackOut rig, from most recent to oldest: 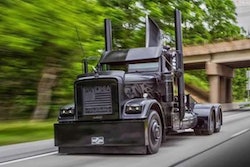