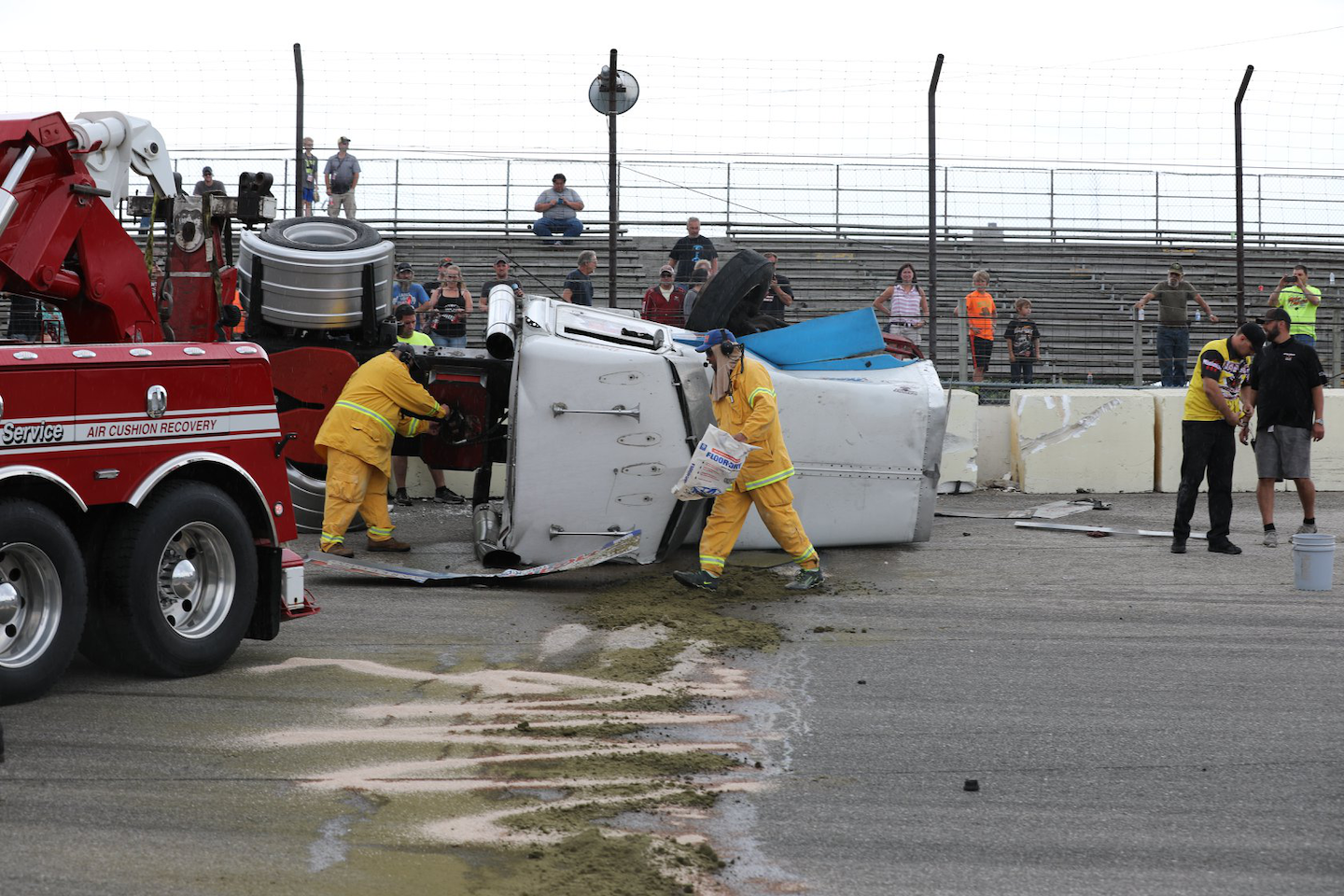 Sunday afternoon’s race at Hawkeye Downs Speedway in Cedar Rapids, Iowa, ended early after Darren Proffitt was collected in a crash that caused his truck to flip on its side. Proffitt walked away unscathed.

Justin Ball has been on a hot streak of late in the Minimizer Bandit Big Rig Series, picking up his first career win earlier this month at Salem Speedway and following it up a couple weeks later with a third-place finish at La Crosse Fairgrounds Speedway and another win at Hawkeye Downs Speedway.

The Bandit Series racers competed in a double-header over the weekend with races on Saturday and Sunday. The Saturday race in La Crosse, Wisconsin, saw Mike Ward pick up his first truck racing win, and the Sunday race, a make-up of a weather-shortened race from June, saw Ball grab his second win in three weeks.

Ward led the La Crosse race from flag to flag, never giving up his claim of the lead after starting second and leading after the first lap. Jon Lisenbee stayed on Ward’s back bumper throughout the race but was never able to get around him.

The race was caution-free until three laps to go when Cody Slowinski blew a tire and hit the outside wall, causing Ricky “Rude” Proffitt to run into him and spin him down into the infield.

On the restart, Ward jumped back in front of Lisenbee and held on for the final three laps. Lisenbee finished second, followed by Ball, Proffitt and Mike Morgan.

“It feels good to lead every lap,” Ward said after the race. “The last 10 laps, the tires were done, so there was virtually no traction. I was just trying to save my right front, and it worked out.”

In the second event of the weekend Sunday afternoon at Hawkeye Downs Speedway in Cedar Rapids, Iowa, Mother Nature was again unkind to the racers, causing the event to end after 18 of the scheduled 30 laps.

Slowinksi started the race on the pole, and the eventual race winner, Ball, started in 10th. He held the lead through the first nine laps before Mike Morgan’s No. 88 Mack began blowing fire out of the stacks, likely the result of a blown turbo, bringing out the first of three caution flags.

On the restart, Slowinski held the lead briefly before Ball rocketed up around Ward for second and began working to get around Slowinski. By the halfway point in the race, Ball had stretched his lead to about three truck lengths over the rest of the field.

On lap 18, Ward got sideways going into turn one, causing him to slide into the protective Styrofoam wall, bringing out the second caution. After a delay to get the track cleaned up, the race restarted with Ball leading Lisenbee, Slowisnki, Proffitt and Mark Noble.

Before the racers could complete the first lap following the restart, Minimizer CEO and racer Craig Kruckeberg got sideways in turn three, sliding up the track into Darren Proffitt as he was trying to pass, causing Proffitt’s truck to flip onto its passenger side. Other racers involved in the crash were Tyler Kruckeberg, Bob Mitchell and Mark Noble. All of the drivers involved got out without any injuries.

During the cleanup process, rain started pouring, and race organizers called the event, giving Ball the win. Behind Ball was Lisenbee for another second-place finish for the weekend, and Slowinski in third.

“I felt good the last time we were here,” Ball said. “When the first caution came out, I thought we were done, but we got it going again. I felt like even without the cautions, we might have pulled it off, but unfortunate circumstances ended the race early.”

The Bandit Series racers will have a week off before returning to action on Aug. 11 at Hickory Motor Speedway in Newton, North Carolina.

With three races remaining on the schedule, Ricky “Rude” Proffitt leads the overall points standings by more than 500 points after collecting a win and six top five finishes in seven races. Behind him in the standings are Mark Noble, Tyler Kruckeberg and Ball.