With Tom Logano in the news after yesterday’s Daytona 500 — his better-known son, Joey, finally won the 500 — I recalled the brief vid that follows with a bevy of details about Logan’s classic 1964 Mack B61. The unit, Logano says, was bought from a friend in Connecticut after a frame-off restoration of the entire thing. Take a run through it, originally shot in 2012, below. 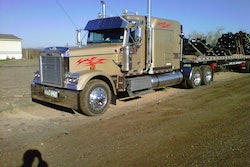 ‘Chrome all over’: Flatbedder’s ’07 Classic