Regular readers will recall my story about the fallen-firefighter rolling memorial this past summer. As  you’ll see in the video above, I got a bit of a closer look at the unit at the Guilty by Association Truck Show in late September, where driver Randy Rogers also ran me through some new additions to the those fallen firemen honored by name on the back of the sleeper. In addition to the original three — Steve Fierro, Tyler Casey, and Tim Hardy, all noted in the original story …

As noted in the prior post, part of viewers’ experience of the truck is interactive, with QR codes on the sides of the power unit itself that, when scanned with a mobile device, will take you to a variety of online locations for more about the history of firefighting in the United States and other memorial sites around the country. In the video above, most of those QRs are displayed and scan-able at various points, and direct links to what they’re intended to point to are included below.

It’s a truly remarkable unit, and with greater urgency present as fires intensify, particularly out West, a fitting tribute to all who give themselves to protecting the rest of us.

**Memorial Run’s Facebook page
**The website of the National Fallen Firefighters Memorial in Emmitsburg, Md.
**A primer on the history of bagpipes-use in fire-service funerals
**The Wikipedia page about the 1994 South Canyon Fire tragedy in Colorado
**U.S. Forest Service’s wildland fires management page 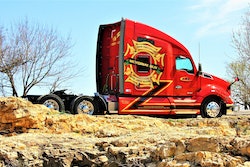 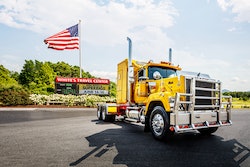 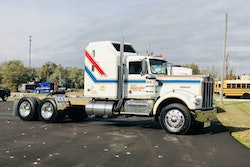 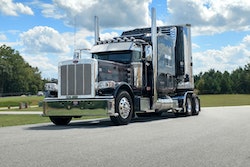