When Neosho, Mo.-based Certified Express Inc. (CEI) President and CEO Scott Wade asked trucker Randy Rogers what he’d like in a new truck in its round of orders updating the fleet of around 150 units last year, Wade had been thinking about a U.S. Army-themed wrap. Rogers “had been in the army about four years” in his past, but he’d spent much more time serving as a firefighter for the majority of his working career, before finally retiring from service to the Seneca, Mo. Fire Protection Area in 2008.

“Nothing against the military wraps,” Rogers says, but he’d seen plenty of them on his hauls and other travels around the country.

What he’d never seen: A rolling “memorial to firefighters. I’ve lost a diversity of them with different departments” over his career. Serving as a public information officer in his latter years as a firefighter, “part of my job was going around to area departments and attending funerals.”

It took him all of “14 seconds,” he says, to convince Wade that it was the way to go, and Rogers used another element of his background — utility with graphic arts — to design a variety of the vinyl accents that now cover the 2019 Kenworth T680, Memorial Run.

Memorial Run comes with a singular mission: “to honor and memorialize all of our fallen firefighters in this country,” Rogers says.

As noted, over his 16 years in the fire service, he’d experienced no shortage of line-of-duty deaths himself. Three friends and fellow firefighters are specifically memorialized on the back of the sleeper’s cab: Tim S. Hardy of Neosho, Mo.; Steve Fierro of Carthage; and Tyler H. Casey of Seneca. Casey’s death in 2008 precipitated Rogers’ retirement from the service, after which he took up trucking more full-time.

Some time after Casey’s passing, he says he realized he seldom thought of the men he’d lost but for on their death’s anniversaries or “when I would pass the location of their loss,” he says. If he was forgetting them, he knew, so was everyone else.

Thus Memorial Run was born, to function as a constant reminder to anyone in its presence. It serves an educational purpose, too, as all graphics are accompanied by QR codes that can be scanned to take viewers to online resources related to firefighting history.

The large Maltese cross represent all fallen firefighters and its QR code will take viewers to the National Fallen Firefighters Memorial website. Other codes explain the origin of the bagpiper in the fire service and the dalmatian. One will take you to a nonprofit foundation for the Granite Mountain 19 who died on Yarnell Hill in 2013. There is also a link to the Storm King Mountain tragedy that took the lives of 14 firefighters from Prineville, Oregon, in 1993 in the South Canyon Fire.

The KW grille’s logo was custom-wrapped to honor FDNY, and the bagpiper shown above references the bagpiping tradition at firemen’s funerals, which dates back to the 1800s in the United States.

The truck, Rogers says, “has brought tears to the biggest of men and their families.”

It’s a special unit,  no doubt. I’m excited to experience it in person next month at the Guilty by Association Truck Show in Joplin, Mo., at 4 State Trucks (Sept. 27-29), where you can see it yourself as well. 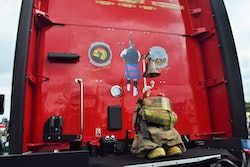 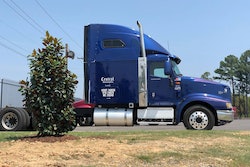 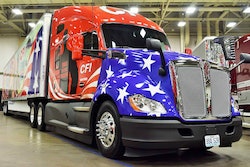