Retired owner-operator Michael Holland, out of Spring, Texas, bought this 2007 Peterbilt 379 new and put more than 900,000 miles on it before pulling it off the road and retiring at the beginning of 2018. He entered the truck in the Shell Rotella SuperRigs truck show last month, held July 25-27 at Trail’s Travel Center in Albert Lea, Minnesota.

Holland gave the truck its “Spice of Life” moniker in honor of his late wife, Joan, who used the phrase as her CB handle. She was his co-driver when they hauled van freight together before he bought this truck. She passed away in 2010.

As Holland says in the video above, the truck was pretty much stock when he bought it, and before he put it on the road, he added a good bit of stainless accessories, including the boxes and deck plate. He also added the 8-inch straight stacks.

Inside the rig are African mahogany floors that Holland built himself, along with LED lights in the floors that you can see in the video. Under the hood is a 625-hp Cat C15 with an 18-speed Fuller and 3:36 rears.

The rig sports a 63-inch flat top sleeper and sits on a 286-inch wheelbase.

When the truck was working, Holland pulled an insulated stainless steel tank hauling hazmat out of Houston and up the East Coast and into the upper Midwest.

The truck was one of three winners in the Non-working Show Truck category at SuperRigs. Holland took home $250 and 10,000 Rotella My Miles Matter reward points. 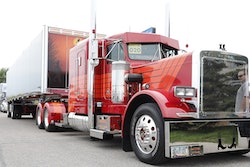 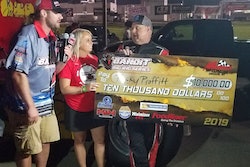 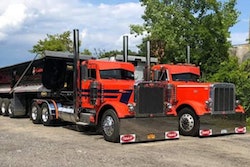