Southern California-based commercial real estate broker Steve Sprenger keeps a couple feet in trucking after a decade and more of hauling in his past. Plenty of his real estate projects end up as truck terminals and various load/unload locations and the like.

As regular Overdrive readers may recall, for well more than a decade he’s also had a foot in with this now-finished resto project, a 1983 Kenworth COE tribute to his principal past employer when he was a driver, LTL doubles-hauling Viking Freight. That company was purchased by FedEx in the early years of this century, and Sprenger shortly thereafter located the cabover in Oakland, where it’d been doing some intermodal and van work under other ownership. A few of the rig’s unique details were dead giveaways that it was a former Viking rig, though, as he narrates in the video above.

Sprenger elaborates there on how the KW came to be under his care. He also points out all that was done to the single-drive-axle unit working with partners including Twins Custom Coach’s Mickey Larson, NorCal Kenworth, and Western States Caterpillar in Idaho. The photos are courtesy of photographer Zach Forest with Western States.

For even more detail, check out this edition of the Overdrive Radio podcast from last month. There, Sprenger details a great deal more of the custom one-offs and other details of the pristine reconditioned unit: 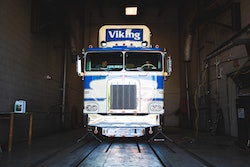 Custom cabover emerges as tribute to a driver’s pride, from former Viking hauler 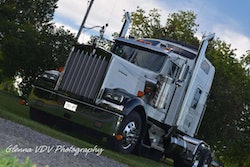 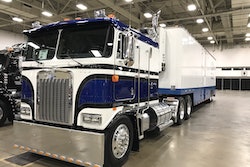 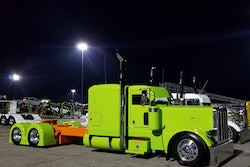