Amelia, Virginia-based Jon Olah leases this unique 1999 Kenworth W900L, “The Joker,” with Hauling Hass Transport. He showed the rig at the Kenly 95 East Coast Jamboree in Kenly, North Carolina, May 6-8, 2021, where it won in the Best Graphics category.

Olah uses the rig to haul flatbed freight across the country. He bought the truck three years ago. It was the first truck he bought himself. He says he's been working on it since he got it and plans to continue for years to come.

The rig runs a Cummins "N14 on steroids," Olah says, accompanied by an 18-speed. "It's a great-running truck," he adds.

The theme of the truck stems from Olah's lifelong love of the infamous DC Comics villain from the Batman series, The Joker.

"The whole theme that you got going on, I've been a big fan of The Joker my whole life, so I decided to make a truck," he says.

All of the graphics with sayings from The Joker are vinyl, which Olah did himself. He says most people he runs into comment on "how crazy and wild it is," but rarely gets bad reviews. When it came to painting the truck, Olah says it took a while to find the correct shade of green to match the purple. 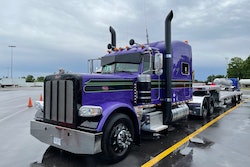 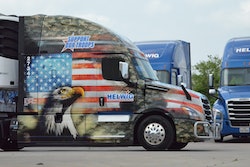 Patriotic graphics from fleets around the country 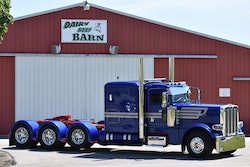 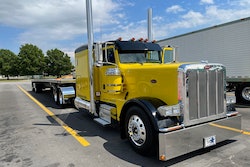