There wasn't a particular incident that led the team at Equipment Express nickname the truck "Troublemaker," Supak says, yet the moniker just seemed to fit. The truck at the time of the show in late July had a freshly rebuilt 625-hp Cat with a PDI Turbo. It only had 738 miles on it at the time.

Equipment Express bought the rig and found out the existing motor was bad, so they tore it out and rebuilt it. Misfits Diesel Service in San Antonio, Texas, added a pusher axle and the rear fenders, likewise repainting the frame at the company's direction. The truck's unique mint green paint scheme was already on it when they bought it.

Inside the cab features custom button-tuck upholstery, custom seats, a painted floor and dash and more.

After the show, the truck was put to work hauling pipeline equipment across the country. It's coupled with an 2019 XL Specialized 55-ton RGN lowboy. 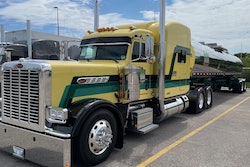 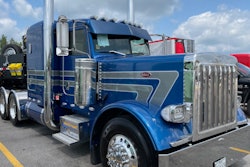 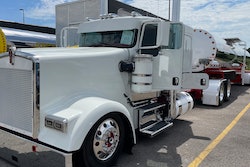