Kenworth has been building W900 tractors since 1961. If you run a Google search for images of the ’61 model, the first thing you notice is that Kenworth has done little to alter the appearance of this tractor over the years.

Under the hood and behind its panels, it’s a different story: Continuous tweaks and upgrades have kept pace with virtually every modern advance, meaning that today’s W900 is a quintessential blend of old and new.

Maybe that’s why the truck has been a perennial favorite. It even became a Hollywood star of sorts, keeping Jerry Reed’s Snowman blowing and going in the classic Smokey and The Bandit films from the late ’70s and early ’80s.

Today, you can’t help but feel that time is running out for the tough old W900. My sense is that Kenworth executives would rather take a swift kick in their collective midsections than kill off the truck. But in this age of super-sleek aerodynamics and fuel-economy fever, it’s tough to see how such an old-school design survives outside of flatbed and oversized hauls.

Even the equally venerable Peterbilt flagship Model 379, the other conventional tractor long cherished by owner-operators, was phased out in 2007 and succeeded by the slightly more aerodynamic Model 389.

On the other hand, a lot of old-school owner-operators are more than happy to take a fuel economy penalty for the honor of driving one of these machines down the highway. That leads us to the Icon 900 – a special-edition W900 unveiled this year at the Mid-America Trucking Show. Featuring special colors presented in throwback paint schemes, the Icon 900 is Kenworth’s tip of the hat to one of the greatest designs to ever prowl an American road.

The move isn’t purely sentimental. Curt Swihart, marketing director, says the company noticed owner-operators returning to the trucking market in response to the favorable business climate. Swihart says the market includes new owner-operators looking to buy their first truck as well as older owner-operators who have been babying older equipment since the downturn and feel the time is right to upgrade.

Most of the Icon 900’s enhancements are cosmetic, selected to highlight the tractor’s classic lines. Kenworth also took nothing away from the truck, either. That incredible long nose still points proudly out, and the view from the driver’s seat can be described only as “commanding.”

Paccar MX power is standard, but if you still want a big-bore diesel for the true retro feel, Cummins is available, as it was on my test truck. It’s fun to hit the accelerator with 600 horses at your command and feel a big truck literally hop to it.

The cab itself is noticeably narrower than modern Class 8 designs. Some drivers like the wider cabs of today, while others don’t. The Icon 900 high-roof sleeper berth still feels remarkably spacious, however, and must have been stunning when it was introduced. The skylights are always a classy touch.

Simple yet elegant brushed-aluminum gauge bezels combine with special Icon badging to give the classic interior a modern feel. This philosophy carries over outside, too, where new LED lighting and an absolute cavalcade of chrome components, combined with those retro graphics, mean the only way people are going to take their eyes off this truck is if a UFO is landing nearby.

I found the Icon 900 to be a blast to take on the highway. Kenworth’s continuous upgrades have yielded a truck that is modern in every sense and not at all difficult to wrangle down the road. Views over that long nose are helped by the high driver’s seat. The truck is amazingly nimble, with deep wheel cuts delivering impressive maneuverability at low speeds.

Continuous upgrades can go only so far with a 54-year-old design. Road noise and interior sound levels are much higher than in today’s modern cabs, but the noise isn’t overwhelming and quickly becomes part of the overall driving experience.

The Icon 900 honors the long-lived W900 design, the men and women who drove it and the special time in trucking when it was such an integral player. So there was no way Kenworth was going to dilute that heritage with a modern automated manual transmission – at least in my test rig. It came with an old-school Eaton 18-speed gearbox, which was silky-smooth in both high and low revs. But fear not: If you want an AMT in your Icon 900, Kenworth will be happy to spec one for you.

Swihart says orders for the Icon 900 blew up after its introduction at the Mid-America Trucking Show, catching Kenworth by surprise. For now, the company won’t say how long this special-edition tractor will stay in production, but stresses that it will be a limited-edition run regardless of how many orders are taken. The company also won’t say how many more years the basic W900 will be produced, so if running a tractor like this is how you like to roll, grab one while you can. 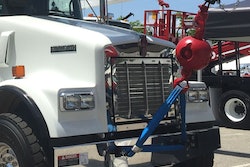 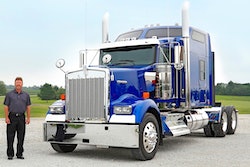