Ken Lukomski, a South Bend, Indiana-based trucker for Veriha Trucking, has been named a Highway Angel by the Truckload Carriers Association for stopping to help at the scene of a serious head-on collision.

He was driving eastbound on I-44 near Marshfield, Missouri, on Sept. 10, when he came upon a serious accident. An eastbound SUV had driven off the road, broken through the cable barriers in the median and entered the westbound lanes, where it crashed head-on into another vehicle. 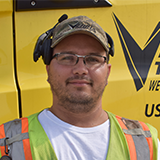 Ken LukomskiLukomski then pulled over and jumped out with his gear in hand. He ran over to a small car with a driver and two small children in the back. He pulled a little girl, about 7 years old, out of the car and laid her down in the median.

“She was seriously injured and wasn’t breathing,” Lukomski said. “There was a woman there who began doing CPR, but she was struggling.” Lukomski took over and helped to get the girl breathing again. “I then ran back and got the toddler and pulled him out in his car seat. He had a small laceration above his eye.”

He then worked with other drivers to extract the driver, an off-duty sheriff’s deputy, who had sustained grave injuries.

“I assured him his kids were okay,” said Lukomski. “He grabbed my hand as they were getting ready to air-evac him and told me to look after his babies.”

Unfortunately, the deputy, Sgt. Justin Burney, died from his injuries. His young daughter sustained serious injuries, but is now home with her little brother, who was not seriously injured.

“When I found the father had passed, it choked me up,” Lukomski said. “We have to have a sense of humanity and compassion for others. As a professional driver, it’s my responsibility to protect others on the road. I have the skills and background and training, and I feel it’s a duty to follow through and represent. You hope the outcome will be for the best. But we know there are tragedies out there.”

The Truckload Carriers Association also named William McNamee, a driver with Carbon Express and a first responder, a Highway Angel for stopping at the scene. When McNamee arrived, he worked with a nurse who had also stopped, to assess the girl’s injuries, stabilize her neck, and get her ready for emergency transport.

For his willingness to help, Lukomski was presented with a certificate, patch, lapel pin and truck decals. His employer also received a certificate acknowledging their driver has a Highway Angel. EpicVue sponsors the TCA Highway Angel program.

Oversize, overweight haulers, prepare for weeklong Indiana revenue department moratorium on new permits
The State of Indiana's Department of Revenue is transitioning to a new system for applying for oversize/overweight permits to haul within its borders. After 4 p.m. Eastern on Monday, Feb. 1, the current system will stop accepting new permit applications, Indiana DoR says. Customers who have incomplete permits in the system at that time will need to reapply in the new system starting Feb. 8, when it's scheduled to come online for new applications. After Monday, Feb. 1, at 4 p.m. and through Thursday, Feb. 4, carriers will only be able to view, pay and print permits that have already been applied for in the current system.

Emergency exceptions to the new permits moratorium Feb. 1-8 will be made, Indiana DoR says, if emergency circumstances apply, such as

Heavy/specialized haulers needing frequent permits can access an FAQ posted at this link.

Bridge inspections closing lanes on I-11 at Hoover Dam January 25-Feb. 5 | Nevada Department of Transportation will be closing lanes both north and southbound Interstate 11 over the Mike O'Callaghan–Pat Tillman Memorial (Hoover Dam) Bridge in Clark County. Monday-Friday, Jan. 25-29, the outside travel lane along SB I-11 will closed from 8 a.m.-4 p.m. daily. Monday-Friday, Feb. 1-5, the NB outside travel lane will close at the same time daily. Lane closures are needed for structural bridge inspections, conducted on a biennial basis per federal law. The 1,900-foot-long, 890-foot-tall steel-and-concrete composite arch bridge opened to traffic on October 19, 2010.Pilot opens new travel center in Arizona
Pilot Company and its One9 Fuel Network announced the opening of an Xpress Fuel travel center and a new restaurant concept in Eloy, Arizona.

The new restaurant concept, Trucker Burger, was created in collaboration with celebrity chef and restaurant owner Tim Love. The restaurant offers a gourmet menu of diner classics, the company says.

However they do it, this owner-op's story holds lessons -- make sure it will be the most quick method of communication to get your response. Worst case, you might find yourself in violation for refusing a test absent your reply.