30-second video tip: Get more sound out of your phone speakers 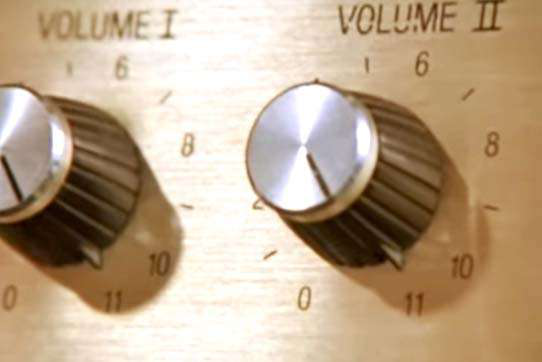 An image from “This Is Spinal Tap” shows the amp with knobs calibrated up to 11. “Up to eleven” has become in idiom in popular culture for “anything being exploited to its utmost abilities, or apparently exceeding them,” says Wikipedia.

One great scene from the rock’n’roll mockumentary “This Is Spinal Tap” has dim-witted musician Nigel Tufnel showing off his amplifiers to another character.

Tufnel notes one amp with control knobs that peak at 11 instead of the usual 10. Believing the amp is superior to others, he explains, “It’s one louder.”

Well, this little trick won’t get you to 11. Or even 10. Still, it’s handy if you’re looking to hear music from your phone or mp3 player and lack the patch cord (or a blue tooth system or docking station) to run it through your truck’s system.

Comment below if you’ve found other good ways to magnify the sound from those tiny speakers inside your truck.