In the early days of the COVID-19 pandemic, when many operators were busy on loads meant to restock groceries and other essential items nationwide, a glaring issue arose: By and large, drivers didn’t have basic personal protection equipment, such as face masks, gloves or hand sanitizer. And, logistically, there were challenges in how to go about getting PPE to them.

Borne out of that bubbling frustration was a partnership, made up largely of independent truckers, that quickly formed into a small, but nearly nationwide, network that stored boxes in their own homes, trucks and storage units and pounded the pavement at truck stops across the country to deliver PPE care packages to their fellow truckers.

Backed by digital brokerage Uber Freight, which secured the care boxes consisting of face masks, a gallon of sanitizing solution, snacks, gloves, sudoku books, sunglasses and more, and with the help of Stuckey’s, DDC FPO and Transfix, that grassroots network of drivers was able to distribute more than 10,000 boxes of PPE at truck stops in a matter of weeks.

“I had blisters on my lips from being in the sun and blisters on my feet,” said Desiree Wood, a longtime independent owner-operator, about the end of her run  on the I-15 corridor handing out those care packages. Her fellow drivers, however, appreciated those sacrifices. “The vast majority of the people are so grateful,” said Wood. The goal was to cut through red tape surrounding distribution of PPE, said Wood, and simply “get out there and do it.”

“Just go get what you have and give it them,” she said. “Even if it’s not perfect. One [younger driver] came up to me and said ‘You’re giving me a gift? Do you know how long it’s been since somebody gave me a gift? I almost started crying because I know how he feels. I’ve been out on the road on Christmas and on my birthday, and for somebody to give you anything, it means something. It means something to them that somebody cares about them.”

Wood is the founder of the Real Women in Trucking advocacy organization, which was the tie-in between Uber Freight and the drivers that distributed the boxes at truck stops. Likewise, this year she founded Truckers Emergency Assistance Responders. RWIT and TEAR supplemented the Uber Freight care boxes with an additional roughly 5,000 cloth masks that were handed out.

From her bases in California and Nevada — where Wood stored pallets of care packages in storage units, her home and in friends’ homes — she drove from Nevada to Florida and back on her distribution mission, stopping at truck stops along the route to hand them out. Once other RWIT and TEAR members reached out about helping, the network quickly grew, with drivers based in Florida, New York, Georgia, Mississippi and elsewhere securing pallets of Uber Freight boxes and stopping at truck stops along their regular routes to hand out boxes to drivers.

Owner-operator Sharae Moore, who’s leased to Riverside Transport and based in Tennessee, was one of those who took boxes in bulk and helped distribute them. She handed out some 1,500 boxes between herself and members of her Facebook group SHE Trucking. “My members were taking boxes, totes, pallets,” she said, and handing them out at truck stops. Moore herself hit truck stops along her usual routes in New York, Tennessee, Georgia, the Carolinas and into Chicago.

Though in the works prior to the pandemic, Wood’s new group TEAR sprang to life in March as drivers on the road faced uncertainty around basic necessities like finding meals (as many restaurants temporarily closed) and, as life under COVID-19 demands, acquiring face masks and hand sanitizer. After working with Uber Freight on an initiative to get food trucks to truck stops, the idea was hatched to try to secure and distribute PPE at truck stops, too.

“At the time, my office was empty, so I said send me three pallets,” said Sharron Lambert, an independent owner-operator based in the Atlanta area. Lambert drives between Atlanta and Birmingham daily on I-20. “I would load up the truck with as many as I could every day, and I would stop by every truck stop until they were gone,” she said. Likewise, she gave some to dockworkers at shippers and receivers. “They appreciated it, too. A lot of them said their employers weren’t providing them.”

As was documented on Overdrive early in March and April, drivers were resorting to ripping up T-shirts — or other clothing items — as makeshift masks to comply with requirements at shippers and receivers. “I heard drivers say they had to use a dirty sock as a mask because they couldn’t make their delivery otherwise,” said Wood. “But the distribution centers have gloves and masks, or at least the relationships to get them to share. That was what I really wanted to come from all of this. What we’re doing is a drop in the bucket of how many drivers are out on the road.” 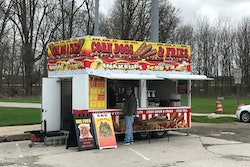 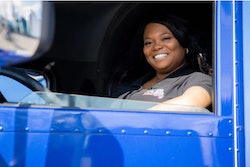