Edward Mark Tricco, leased to Bison Transport in Winnipeg, Manitoba, Canada, was named 2015 Owner-Operator of the Year by the Truckload Carriers Association and Overdrive Tuesday night. He won a $25,000 cash prize.

The awards, sponsored by Cummins and Love’s Travel Stops, recognize drivers who have driven safely, enhanced the image of trucking and served their communities. They were announced at TCA’s annual meeting in Las Vegas.

Accepting the award, Tricco said his job has given him the opportunity “to give back to the community and protect the environment.”

Tricco, of Brandon, Manitoba, has logged more than 4.3 million accident-free miles during his 36-year driving career. He has been leased to Bison Transport since 1996 and pulls a reefer with his 2009 Volvo.

In a video interview played at the TCA awards banquet, Tricco recounted rescuing another truck driver who was freezing to death in his disabled truck. “He would’ve froze to death,” he said. 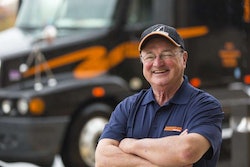 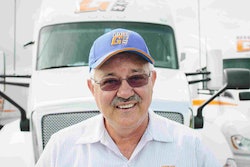 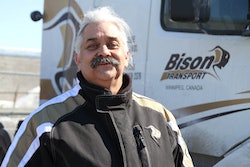