Eating in the dark 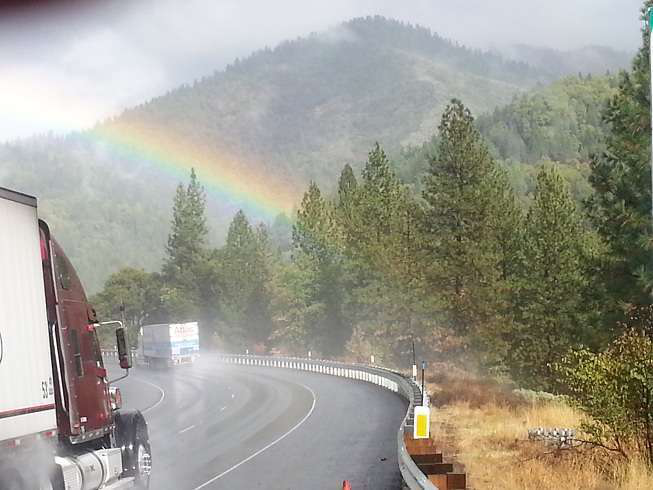 I don’t know what it is about California, but it seems like every time we get out there we can’t stop anywhere to eat for days at a time. I’m not crazy about California — there’s only two pretty parts, far North (pictured, with bonus rainbow!) and far South. The rest of it is smoggy and looks like Kansas with a bunch of houses and fruit trees. And it takes for freaking ever to get anywhere because the speed limit is 55 for big trucks. Who thinks it’s a good idea to make the largest thing on the road an obstacle? I’m pretty sure the idiots who make those rules don’t have driver’s licenses and sit in big offices hating on trucks somewhere in Sacramento.

California isn’t truck-friendly, and it’s expensive as hell to run in. Now that I’ve made friends in the California State House, I’ll go on with the post.

We were heading toward the Reno area from Ontario. Reno and Vegas are strange — there’s really no straight shot into either one of them. There are state routes involved and a lot of rugged terrain. I guess it’s to keep all the sin trapped up there. It was the first time George had been on this route, so we weren’t sure about food stops. FYI: there are none.

Let me re-phrase that: there are none with truck parking. For a really long way.

By the time it got dark, I had resigned myself to eating a package of tuna and some crackers. We keep the truck stocked pretty well, there’s plenty to eat, but I look forward to at least one hot meal a day. When I don’t get it, I tend to be a little less sparkly. (Side note: When I announce I’m going on a diet, my entire family suddenly goes on an extended business trip where they have no phone or internet service. It’s weird.)

I was a little grumpy. I ripped open the package with a flourished sigh. George wasn’t talking to me, paying attention to the dumb road, and I was feeling generally whiny anyway. I took a giant bite of what I expected to be plain, white, delicious, flaky albacore tuna. To my horror, the plain tuna had somehow morphed into the gelatinous crime against mankind they call tuna salad.

Let me refresh memories here: I do not eat condiments of any kind. No mustard, ketchup, ranch dressing, barbecue sauce, pepper drippings, guacamole paste and most especially no mayonnaise. Mayonnaise makes me want to barf looking at it in the jar. If I get it on my tongue, I consider having my entire lower jaw removed. In nurse life, my only kryptonite was snot, and mayonnaise reminds me of snot. I absolutely refused to do pediatrics based solely on the amount of snot involved. That’s completely true.

“Babe, I know you’re bored, but I’m really concentrating over here. Our exit is close, I’ll talk to you when I get parked.”

I stumbled to the bunk and quietly set my tongue on fire. We got to the exit and parked.

“Are you OK? I’m sorry, I needed to pay attention. I’ve never been here before and it’s dark.”

“I know. I’m sorry. I wouldn’t have bothered you if someone hadn’t tried to poison me to death by switching out the plain tuna I bought with tuna salad. I put tuna salad in my mouth. It was horrible. I chewed it. It had crunchy things in it. This is never going to be OK.”

“I wondered why you bought it.”

“I would never buy…oh my gosh, I did buy it. No wonder it was on sale. I totally thought it was plain tuna.”

“You bought five packs of it.”

“Why would you let me do something so horrible? Five packs of tuna salad?”

“Babe. I’m sure there are plenty of homeless people who would be happy to have a bag of tuna salad.”

“That makes me want to cry. What if all you had to look forward to was a bag of tuna salad? How crappy would your life be?”

“Infidel. I knew you were an alien.” 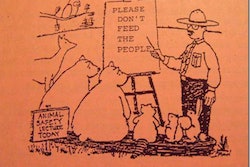