The COVID-19 pandemic’s topsy-turvy effects on freight this year have been well-documented. Yet for clientele of Overdrive‘s Partners in Business coproducer ATBS, the year’s first half held some relatively good news for “what really matters” to owner-operators, said ATBS President Todd Amen. Net income averaged above even what clients saw in the first half of 2018, a markedly good year for rates and freight, particularly in 2018’s first half.

Given unrest around the country and continuing worry around the pandemic, though, until November “the election is all that matters,” said Amen, summing his prospects for economic performance until year-end. Before he got to that invocation of uncertainty, he provided plenty clarity on ATBS owner-operator clients’ miles, income and other performance through the first half of this oh-so-strange year. There’s some good news in that, and plenty to benchmark your own business’ performance against if you’re a leased dry van, reefer or flatbed hauler, or an independent with your own authority.

The freight/rate highs of the March to early-April period were strong enough, at least, to make for a healthy six-month average for ATBS clientele. At once, though, the lows in some segments were enough of a drag to put 12-month averages through June for leased flatbed and dry van operators off by relatively small margins from the prior 12 months.

As previously reported from that session, leased reefer operations and independents in the aggregate remained in the green, reefer by a larger margin.

If you missed ATBS President Todd Amen’s dissection of the net income numbers and lookback on early-year predictions, with an outlook for the rest of the year, find essential excerpts in the video at the top of this post, selected from the Partners in Business online seminar that kicked off the Overdrive‘s GATS Week series of live events Aug. 24. You can also view the full presentation as it was streamed to Overdrive‘s Facebook page originally via this link. 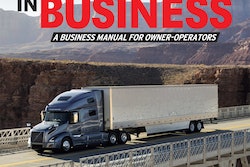 How to manage cash flow with potentially rough roads ahead