Virginia-based owner-operator Michael Manuel jotted down ideas for years — in the middle of the night occasionally, sometimes when he was driving one of his flatbed fleet’s trucks — for a truck build he’s long wanted to build.

Last October, he took ownership of a new 2015 Peterbilt 389 Fitzgerald glider kit, and he immediately began work, stripping the truck down and prepping it to be the canvas for the idea notebook he started almost a half-decade ago.

“Autism: One of Many” wasn’t only built as a dedication to Manuel’s daughter Kara, but it also serves as a broader awareness campaign to help destigmatize autism, Manuel says. Kara, 23, is autistic.

The Pride & Polish National Championship crowns the country’s top show trucks each year via a special round of judging at the Great American Trucking Show. The finalists in the competition qualify by winning Best of Show at Pride & Polish contests held throughout the season.

The winners were announced Aug. 27 at a ceremony held in Dallas at the Kay Bailey Hutchison Convention Center in Dallas, Texas, at the Great American Trucking Show.

His highly customized in-house-built Pete, “The Hustler,” is the second of Eilen’s trucks to pick up a Pride & Polish National Championship. The Hampton, Minnesota-based owner-operator hauls aggregates.

Brigham City, Utah-based operator Skidmore’s championship was also his second. He picked up a Pride & Polish National Championship in his category in 2014 with a different rig. His 2016 Peterbilt was qualified to compete in two categories at this year’s championship, having won Best of Show twice — once as a combo and once as a bobtail.

Cousins’ and Calangelo’s rig, a 2015 Kenworth W900 Icon, was the first-ever Icon built by Kenworth. The Carthage, Missouri-based truckers took ownership of the rig after Kenworth introduced it last March, stripping it down and rebuilding it as a custom show truck. The pair took home two Pride & Polish Best of Show victories in the 2015-2016 circuit, winning the October 2015-held PDI Pride & Polish and the April 2016-held 75 Chrome Shop Show. Cousins’ and Calangelo’s rig also was named the Truckers’ Choice national champ, having won a special online voting contest by Overdrive readers.

The two other champions qualified to compete at last year’s GATS. Von Ormy, Texas-based owner-operator Joe Regelado and Rigby, Idaho-based operator Jordan Jay both won Best of Show in their respective categories at the 2015-2016 season’s kick-off in Dallas last year.

Also announced at GATS Aug. 27 were five Best of Show winners, who are now qualified to compete in the 2016-2017 National Championship to be held at next year’s GATS.

Freddy Valasco out of Sulphur Springs, Texas, won Best of Show in the Working Combo category with his 2003 Peterbilt 379 and ‘03 Great Dane reefer.

See photos of the Best of Show winners below. A full list of winners from the show will be published on OverdriveOnline.com next week. 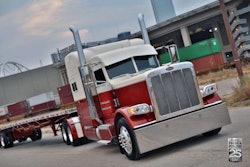 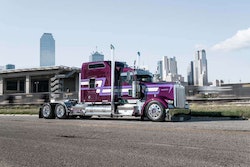 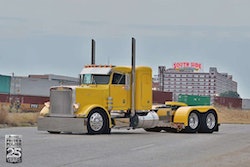