Daniel and Phyllis Snow, owners of Harrison, Arkansas-based Snow Trucking, are mainstays on the truck show circuit, having won a multitude of awards at shows across the country with their ever-evolving 1996 Freightliner Classic XL, “The Goose.”

Most recently, the couple’s rig picked up two first-place awards in Overdrive’s Pride & Polish virtual competition, winning in Interior and Working Combo, 2000 & Older. The truck also placed second in Antique. That impressive performance follows the 2020 virtual Pride & Polish, where the Snows won in the Working Combo, 2015 & Older category and placed second in Interior.

The couple bought “The Goose” in 2005 and have been working on upgrading it ever since. In 2011, they added the 140-inch sleeper that they bought at a salvage yard, a story told in more detail in this edition of Overdrive Radio from the Guilty by Association Truck Show in 2016.

They have now transformed the sleeper into a master suite decked out with all the amenities – a full kitchen, bathroom, fold-out bed and more. It also features plenty Dark Jade Medium Metallic accents to go along with the rest of the truck, along with plenty of XK Glow lights that can change color and strobe with a click of a button.

Since the 2020 Pride & Polish competition, despite a number of personal challenges the couple faced throughout the year, the Snows have added a new front bumper, switching from a stainless bumper to a Talladega Fiberglass painted bumper to match the paint and striping of the front fenders. That was the result of two accidents in 2020 in which they got hit while parked at a truck stop.

“We try to take whatever is negative and change it to something positive,” Daniel said. “So that’s what we decided to do. The second time we got hit, we decided to go ahead and change colors on the front end. We stayed with the green, of course, but we used the heavy metallic vinyl in the green on the bumper, which matched a lot of the interior we had done in vinyl also.”

In addition to the front-end work, the Snows also added trailer fenders to their 2006 Utility 4000 dry van and swapped out their drive fenders to Talladega Fiberglass fenders. They also took the vinyl off the sides of the tractor and swapped it for stainless.

Before the COVID-19 pandemic really took off in the U.S. in 2020, the Snows were slowed down in February when Phyllis suffered a heart attack while they were at home in Arkansas. They happened to be home because their truck had been hit the first time just two days before her heart attack.

Due to being hit, however, the Snows were able to use the insurance money from the accident that they could have paid a shop to fix the truck to keep their business afloat for two months while Phyllis recovered, and Daniel did the body work on the truck himself.

“You can call that being hit was a blessing from God,” Phyllis said. “We went home, I had the heart attack, then we had the money for him to repair 'The Goose' and us stay afloat for a while. It was a blessing.”

Daniel also did some odd jobs – everything from mowing grass to working on engines – to bring in some extra income while he was helping Phyllis recover at home.

“Money is not what everything revolves around,” Daniel said. “We figured if we could come up with enough money to just survive, then I wanted to be there with her and to make sure she was OK.”

Phyllis was cleared to go back on the road at the end of March, but the doctors recommended she stay home at least another month to avoid the height of the pandemic. It was another 30 or so days after she went back out on the road with Daniel that she was finally cleared to drive again.

“We base everything we do on our belief in God and belief that He’ll take care of us,” Daniel said. “We live by faith. So, we believe that God wants us on the road. We do our missionary work called ‘In God We Truck,’ and we truly believe this is where He wants us.”

Both Daniel and Phyllis ended up catching COVID during 2020, as well, but they didn’t let it slow them down. The Snows have a positive outlook on business through the rest of 2021 and into 2022. They run the spot market and have learned, especially with a big bunk behind the cab, they do better to look at the money and weight of a load and not worry about where it’s heading. They use a variety of load boards, and Phyllis said different boards tend to see better loads from brokers during different times of the year.

As for truck shows, the couple is looking at attending a few shows before the end of the year, including the Guilty By Association Truck Show at 4 State Trucks in Joplin, Missouri, near the end of September. 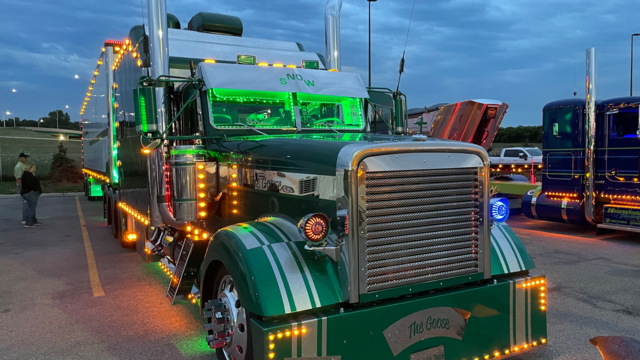 The truck features hundreds of lights, inside and out.