Laird “Spike” Fuller, the owner of Broomfield, Colorado-based Spike Transportation, picked up a third-place award in the 2000 and older Bobtail category at the Great American Trucking Show Pride & Polish in August with his 1995 Peterbilt 379.

Fuller bought the truck in 1999 and has been running it as an owner-operator ever since. He’s currently hauling mostly reefer freight across the U.S., but he tries to stay out of New England and the Pacific Northwest.

The rig has a one-of-a-kind, custom-mixed paint job that Fuller calls “lime gold,” which he did in 2012. As he explains in the video above, a hit-and-run accident in 2014 gave him the chance to go back to the shop and play with the color a little more and add more pearl to it to make it shine more.

While there is some of the lime gold inside the truck, such as the steering wheel and shifter, Fuller says he’s not a big fan of interior paint. Most of his interior is western-themed with cowhide and tan leather. The western theme is carried over on the dash, where his switches are bullet casings and a couple knobs are revolver cylinders. Additionally, as he notes above, the back of his visor features an American flag, a bald eagle and the seals of each branch of the U.S. military. 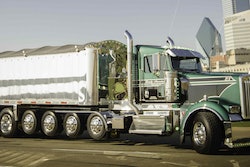 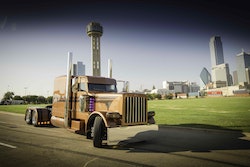 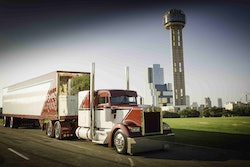