Dennis White, the owner of Dennis White Trucking out of Broken Bow, Oklahoma, bought the 1987 Peterbilt 359 in the video above in May 2018 to “fix up to show and play with.”

The truck was on display in the Great American Trucking Show Pride & Polish competition in August, where it picked up third place in the Limited Mileage Bobtail class.

As White explains in the video, he tore the truck down to just the cab and frame and rebuilt it from there with the goal of restoring it to close to its original look.

He says he is most proud of the work he and his shop put into the interior. They completely redid the interior to restore it to its original style with just a couple quality-of-life improvements, such as Legacy seats from Seats Inc.

Under the hood is a 425-hp Cat with a 15-speed, which White says they redid themselves. They replaced every component on the engine and added some “bling,” such as a stainless radiator and more.

White says the original goal with the rig was to fix it up into a show truck and have fun rebuilding it, and the project went further than he planned. 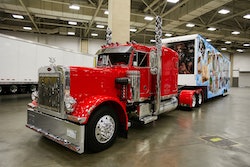 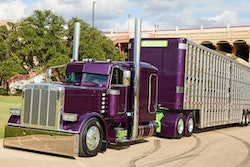 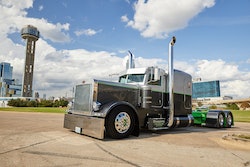