Montana-based fleet owner effectively shut down following multiple violations
A Montana-based trucking company owner and carriers he operates have been ordered to immediately cease operations by the U.S. DOT after state and federal investigators found widespread violations of numerous regulations.

Tabner, Vallise Automotive Group and Central Logistics may be assessed civil penalties of up to $27,813 for each violation of the out-of-service order. The carriers may also be assessed civil penalties of at least $11,125 for providing transportation requiring federal operating authority registration and up to $15,691 for operating a commercial vehicle in interstate commerce without necessary USDOT registration.

If violations are determined to be willful, criminal penalties may be imposed, including a fine of up to $25,000 and imprisonment for a term of up to one year. FMCSA is also considering civil penalties for the safety violations discovered during the investigation.

Arizona adds trip-planning features to 511 site
The Arizona Department of Transportation has added a new feature to its 511 website that it says will help truck drivers more easily plan their route through the state.

The new feature allows truckers to see commercial vehicle restrictions along state highways, allowing drivers to plan their route to avoid those restrictions. On the 511 site, drivers can click on the “Map Legend” box on the right-hand side of the screen and check the box next to “Truck Restrictions” to bring up the restriction icons on the map. Clicking on an icon will show details including length and width restrictions and any escort requirements.

The Department of Transportation Office of Inspector General alleges that Shuklin provided, or directed through wire communications, materially false statements to federal regulators, third-party companies and customers to further the scheme. The moving enterprise defrauded more than 1,800 victims for an amount estimated to be between $1.5 million and $3.5 million.

Driver gets Highway Angel wings for helping fellow trucker
John Vesey, an Oregon-based truck driver for Hirschbach Motor Lines, has been named a Highway Angel by the Truckload Carriers Association for stopping to help a fellow trucker who lost control of his truck during a fire and drove off the road.

It was Dec. 19, and Vesey was traveling westbound on U.S. 34 near Galesburg, Illinois, on his way to Monmouth to pick up a load. It was late in the morning when another truck passed him in the left lane of a four-lane divided highway. 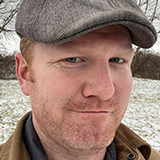 John Vesey“As he got out about a quarter-mile ahead of me, he started to lose control,” Vesey said. “He went into the center median and then careened over to right side, went off in the ditch, and into a corn field.”

Vesey slowed and pulled over, and he saw the other driver jump out of the truck while it was still moving. “I could see a flash of smoke and fire coming out of the cab,” he said.

“I then went back to driver to see if he was alright,” he said. “He ended up having second-degree burns on his hands and his hair was singed on the back.”

Vesey then called 911 and went back and unloaded the other driver’s fire extinguisher as well. The fire was contained to the center console area.

Vesey is trained as a paramedic and has a lot of emergency response experience and training.

“I interned and spent the first year as a paramedic and EMT in Chicago and got my paramedic license. It was an awesome experience,” he said. “I spent a year on the private ambulance side and then moved up to northwest Illinois and was a paramedic there.”

He was also an Eagle Scout and is a Navy veteran. He’s been driving for eight years and also has office experience.

For his willingness to help, TCA presented Vesey with a certificate, patch, lapel pin and truck decals. Hirschbach also received a certificate acknowledging their driver as a Highway Angel.

However they do it, this owner-op's story holds lessons -- make sure it will be the most quick method of communication to get your response. Worst case, you might find yourself in violation for refusing a test absent your reply.