Til Friday Trucking, led by Michelle Hefner out of Maiden, North Carolina, puts all its chips on a simple bet, an honest day's work for an honest day's pay. The Small Fleet Champ semi-finalist operates five trucks with four drivers, only runs local, has operators home every night and weekend, and guarantees minimum daily pay to every driver who shows up ready to work, whether they run or not.

Perhaps the secret to Hefner's success lies right there in the name. "People remember the name," said Hefner. "We don’t get paid til Friday, and we own our own company, so we're only gonna work til Friday."

In a trucking industry that so often demands work-life balance be sacrificed at the altar of productivity opportunity, Hefner and Til Friday hold the line against weekend work, driver detention, repair bills, and virtually every other irritant in the business with a well-thought-out model that's seen the fleet grow from two to five trucks in the last four years.

Hefner pays her two company drivers and two owner-operators on percentage, and prides herself on providing transparency with her rates.

"These guys come from always feeling like they're getting hoodwinked," she said. "There's no law that says they’re allowed to see what the actual rates are, so I’m up front, and if they ever have questions I'm happy to sit down and show it to them."

Til Friday mostly runs packing materials, with a big contract from a manufacturer of paper products for companies like Chick-Fil-A and Instameal, but Hefner also works the load boards for spot freight to keep her drivers busy between contract loads. If ever she has no work for a driver, that driver gets $100 for the day, no questions asked.

"If I can’t find you anything to do, if there's no freight for you to run tomorrow but you’re willing and available to run it and it's my fault you’re not running, you're still going to make $100," she said.

While Til Friday mostly works with one large client with that contract, another customer, ICC Boxes, also feeds Hefner and company freight in a standing agreement to haul a "kind of shuttle run" load five days a week, she said. Sometimes, ICC needs another load sent, and Hefner finds the capacity to get it done.

Hefner's biggest client echoed ICC's appreciation for the company. "I enjoy working with Til Friday," said Tawana Thomas, the plant manager at Commercial Plastics Recycling. "They all are like family and the service is excellent. If I plan a week in advance or need a last-minute trip or drop, Michelle and her crew make it happen. It’s nice to not worry about things. There are a million things going on, and I don’t need another problem."

Hefner also prides herself on having cultivated relationships with brokers for spot freight and some other shippers as well, all who know her work and prefer her, which has helped to drive profitability.

"A lot of people can’t stand brokers, but find the right ones, treat them right, keep them updated on shipments, and they'll love you and call you every single time," she said.

Further, Hefner places a high priority on making sure her operators have a chance for predictable shifts.

"These guys wanna be home, they have families," Hefner said. "I deliver on that promise. We don’t work on the weekend unless something spectacular happens," and even in those cases, operators get advance notice and have some flexibility there. The name of the game at the carrier is, and always has been, Til Friday. Hefner prides herself on that.

While the name and philosophy might make for good recruiting material, Hefner said she's truly not in the business of recruiting drivers, and that all of her operators have thus far been people she knows personally. Her husband, a high school friend, and a few others, all of whom got in on referrals, make up her small fleet.

Further down the family line, Hefner's son owns a diesel repair shop, A & S Truck Repair in nearby Lincolnton, where all her trucks, company and otherwise, get top priority.

"We work on our own equipment," she said, but the son's shop handles a good deal of the work, too. "We split the shop with him, and even with the owner-ops, we drop everything to help them with their equipment when something happens. We know as truck owners, with one major breakdown, you can lose everything."

That's where the fleet's five trucks for four drivers comes in handy. "We have a spare truck not just for us, but if our owner-operator's truck is down he can still keep making money."

Jeremy Godwin, owner of H&R Transport, a small fleet peer in that area who hauls dry van and bulk tanker commodities, called Til Friday a "sister company," and said the Hefners have been helpful toward his venture every step of the way.

"They’re good to do business with, we run loads for them and they help me out with loads sometimes," said Godwin. "You couldn’t ask for a better couple."

H&R uses the Hefners' diesel repair shop as well, and Godwin seconded the claims about Til Friday's work environment.

"They have a tendency to get drivers and keep drivers," he said. "They run two or three trips a day and can be done by two or three o'clock and make their money."

Another selling point for operators is the hassle-free nature of the more-local hauling they do, where Hefner said they don't have a need to use logging devices, but timesheets.

Hefner's playful naming scheme extends to the trucks, with a '97 Mack she calls "Clifford the Big Red Dog" and two Freightliners called "Snoopy" and "Underdog."

Hefner credits her success thus far to taking things slow and easy and only betting on people she knows well among drivers, customers and even fellow fleets.

"We have a relationship with a bigger fleet up the road which we've actually got a dedicated run for them -- every day a short 20 miles," she said. From the neighboring, larger fleet, too, "we've been really fortunate" with regard to the soaring prices for used equipment by picking up some trailers and even a truck, "Underdog," she said.

In an industry so often obsessed with growth at any cost, Hefner has a good handle on maintaining and building the relationships that have treated her well, also with a tireless dedication to maintaining her standards. As far as future growth goes for the business, "we weren’t really looking to grow" in past and "we’re not going to grow fast" in future, she said. In fact, her recent-years growth came after owner-operator friends came to admire her operation and were "begging" to lease on. Overall, she said, she's extremely slow to hire as she hopes to maintain quality across the board by going on "gut" instinct about new trucks and drivers.

"We’re really particular about who we’ll let work for us, who we’ll let represent Til Friday," she said. "Our drivers are the face. ... If they’re late or lay out or don’t secure their load, it looks bad on us."

She looks forward to celebrating her 30th wedding anniversary with her husband, one of the company drivers, this year, but until then, catch her with her nose to the grindstone booking loads, but only til Friday comes. 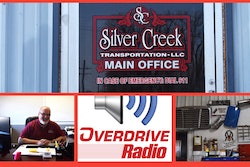 What do a three-year cargo-van expediter and Overdrive's 2021 Small Fleet Champ have in common? 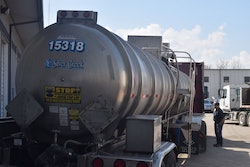