Richard Woods, a Mississippi-based owner-operator who hauls intermodal containers, was named the winner of 2017 Overdrive-Red Eye Radio’s Trucker Talent Search finale Friday at the Great American Trucking Show. A panel of judges named Woods the victor in the 2017 contest after a sing-off style competition between the contest’s three finalists. The other two finalists were drivers Michael Lochmiller and Terrance Mathis.

Woods won $1,000 cash and a free studio recording session provided by AxleOutPro, which will also produce a video of the session.

“I’m blown away,” Woods says. “I’m extremely grateful for being part of all of this. With the talent on stage, the other two guys, I didn’t expect to walk away winning it.”

Woods strummed an acoustic guitar and played a song, “Gran,” that he wrote to honor his great-grandfather. Woods grew up driving trucks and farming with his dad, grandfather and great-granddad in Mississippi.

He started playing guitar at 13 and has played ever since. He drives a 1999 Western Star 4964EX, powered by a 500-horsepower Detroit Diesel, and runs mostly in a 500-mile radius around Memphis, Tennessee. He lives in Hickory Point, Mississippi.

The 42-year-old owner-operator got his CDL when he was 19 and has been driving ever since.

This is the fourth annual Trucker Talent Search finale. Each year, Overdrive readers enter the contest by uploading videos of themselves singing either original songs or covers. Judges then narrow the field to the three finalists.

See a portion of Woods’ performance in the tweet below:

Trucker Talent Search finalist Richard Woods performing a song he wrote in memory of his grandpa in the Talent finale. #gats pic.twitter.com/X2Oc79QMEC 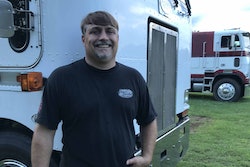 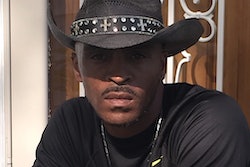 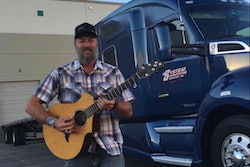