With one truck, nine guitars and a growing set of industry projects, 2019 Overdrive-Red Eye Radio Trucker Talent Search winner Taylor Barker is finding his place with his music peers and others in trucking.

Barker, 47, lives in Kingsport, Tennessee, with his wife, Cherie. He’s been driving trucks for 22 years, the past five as an owner-operator. Before driving, he owned and operated a bar/restaurant, which gave him an outlet to perform his music. It was there that he gave his first vocal performance. Before, he had focused solely on the guitar, which he picked up at age 15.

Growing up, his best friend’s parents drove a truck. “I thought they were legends,” he says. Barker, who occasionally sat behind the wheel of their parked truck, recalls telling himself, “One day, I’ll drive one of these.”

After driving a fuel tanker in the U.S. Army National Guard, he got his Class B license in 1995, earned his Class A in 1997 and then officially began professional driving.

“I started pulling tankers early in my career and continue to this day,” he says.

Leased to Heniff Transportation Services and hauling hazmat, Barker says he’s grateful for a company that has “stood behind me 100%, not only as a trucker but as a musician as well.”

It hasn’t been tough to find support among the trucker-musician community, either. Barker says he’s fortunate to count as friends Tony Justice, one of the best-known recording artists who still drives full time, and Bill Weaver and Paul Marhoefer, participants in past years’ Trucker Talent Search contests.

“These guys have always given me the advice I need to hear and not necessarily what I want to hear,” says Barker, who won this year’s contest at the Great American Trucking Show in Dallas. “They have always been there to show support and encouragement since the day we met.”

After hearing Barker perform, Weaver offered him some of his stage time at GATS truck parking concerts. That’s where Barker met Justice and Marhoefer. “I could not ask for a better bunch of friends to lean on for support,” he says.

Weaver recalls Barker commenting on his music online about seven years ago. “We exchanged numbers and finally met the first time up north of Pendleton, Oregon, and sat there with our guitars and played all night,” Weaver says. “Taylor is an awesome guitarist, writer and singer who leans on the heavy guitar notations to set up the emotion of a song. His style is completely different than mine.”

Barker also got to know this year’s other two Trucker Talent Search finalists: Ken Freeman of Centreville, Mississippi, and Jason Henley of Jemison, Alabama. Barker had met Freeman at the 2018 GATS, and he met Henley at this year’s show. “I love his style and energy,” he says of Henley.

Barker writes songs, but for the contest he opted to cover Zane Williams’ “While I Was Away,” about a father whose work keeps him away from home, missing his son’s milestones. Freeman performed his original song “Rainy Days,” and Henley performed his “Nebraska Drop ’N Hook.”

Recording, and hopefully releasing, his songs means Barker can do more than just get his name out. “I have vowed to use all the publicity to help others in need, such as All Truckers Together Against Child Abuse, Truckers Final Mile and other charities that selflessly help others,” he says.

Barker and his wife, Cherie, like to extend themselves to others. “Taylor is the most genuine, generous person that I have ever known,” Cherie says. “He likes to use his passion for music to benefit those in need. He walks the walk.”

The couple became friends in middle school. “He claims that he had a crush on me then, but I never knew,” Cherie says. Barker’s family moved to another school district, and the two lost touch. Finally, 10 years ago, both divorced at the time, they reconnected.

“He invited me out to hear him play,” Cherie says. “I became his biggest fan, and we have been together ever since.” They recently celebrated their sixth wedding anniversary.

Cherie says she is impressed by how truckers – and their spouses – navigate the often hectic trucking lifestyle.

“Being married to an over-the-road driver, you have to be creative, because time at home is at a premium,” she says. “He has to fit in time with extended family, do any business that he may have, and still find time to relax and decompress in just a few short days.”

She and Barker enjoy many of the same things, so when he’s home, they can spend quality time together. “We try to find a balance between his passions and mine.”

A couple of those passions are organizing charity benefits and upcycling furniture for her store, Cherie’s Boutique.

“We both design and build things from old furniture, such as benches made from old beds, cabinets made from old doors,” Barker says. “By request, we build traditional furniture from our customers’ plans from barn wood or their reclaimed wood.”

Barker draws support in his personal and benevolent interests from not only his wife but also other relationships. That includes Heniff Transportation, which has encouraged him, “supporting my causes both mentally and financially so that together we can make a difference,” he says.

Matthew Kane of the Riteload.com load board also “has been there from day one,” Barker says. With Kane’s support, Barker has a new radio program, the “UnPlugged Radio Show,” on the Hammer Lane Network, airing Wednesdays from 8 to 10 p.m. ET. On it, Barker highlights small trucking businesses and charities and interviews “folks who make a positive difference in our industry and in our lives,” he says. 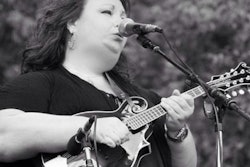 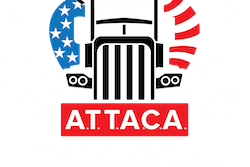 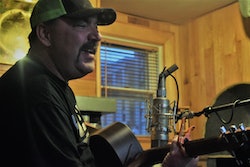 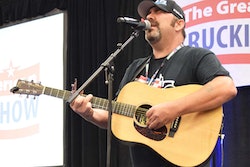